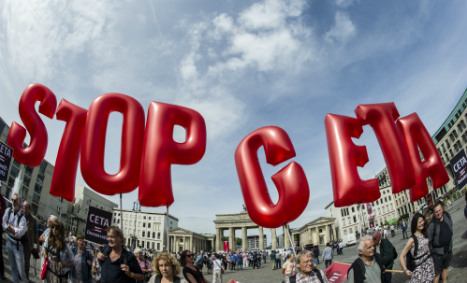 Canadian and European leaders formally concluded the deal known as CETA in 2014, but implementation has been delayed due to last-minute objections in Europe over provisions for an investment protection system that would help shield companies from government intervention.

This system is key to a similar but far more ambitious agreement currently under negotiation between the EU and US and has drawn fierce criticism, especially in Germany where hundreds of thousands of people rallied in October to oppose both accords.

“It is a highly political agreement that has been widely discussed,” said Merkel, adding that the “Bundestag is allowed to be involved of course… in national decisions”.

Juncker had however said Wednesday that the deal could be endorsed by the EU without national parliaments' approval.

“The Commission has come to a conclusion that … it is not a 'mixed agreement'”, said Juncker. In EU jargon, a mixed accord is one that requires both the approval of the European parliament and national legislatures.

The EU's 28 member states had insisted in May that CETA should only enter into force after national parliaments give their approval.

The deal was scheduled to be signed at the end of October during a summit in Brussels with Canadian Prime Minister Justin Trudeau, and it was due to be implemented in 2017.

The EU is second only to the United States among Canada's trading partners, while Canada ranks as the 12th most important trading partner for the EU.