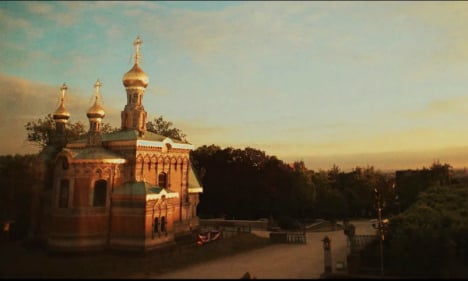 When Waref Abu Quba arrived in Darmstadt, a town 40 minutes south of Frankfurt, he knew he needed to start on his film project immediately.

“I have to capture it now, I told myself,” the filmmaker remembers in a phone call with The Local. “I wanted to capture the feeling while it was fresh.”

It was the spring of 2014 and 30-year-old Abu Quba had just arrived in Europe for the first time.

But the circumstances were far from ideal. His Syrian homeland was being ripped apart by a brutal civil war. And, more personally, he had flown to Germany to attend his mother's funeral.

“After a while though, I started enjoying the little things. I was excited to be here of course.”

As he got back on his feet, he started piecing together film footage that he would eventually turn into the short film City, Light and Movement.

Over an 18-month period while has was waiting for his refugee status to be granted – and with little else to do outside his German language course – he started filming around the city.

Last week he made the eight-minute short film publicly available online and it has so far been viewed almost 20,000 times.

Divided into three chapters, it provides intriguing snapshots of Darmstadt, a city of 150,000 with a history that stretches back to the 11th century.

From a first chapter which uses a hyper-lapse technique to provide jerky footage of some of the most iconic sights in the old town, the film builds in pitch to provide hallucinogenic pictures of commuters, transport and trams which leave the city barely recognizable.

Abu Quba readily admits the city in southern Hesse is not the obvious choice for such a scenic homage to urban spaces.

“When I go to Berlin people look at me confused when I say I live in Darmstadt and ask ‘why do you live there?’

“But there have probably been a hundred films made about Berlin – so why not Darmstadt?” says the Damascus native.

While it is perhaps not the number one destination for people who move to Germany, Darmstadt has much going for it.

It is home to the world's oldest pharmaceutical company, Merck, the city's largest employer and one of the reasons it is among the richest cities in Germany.

It is also headquarters the European Space Operations Centre.

“I didn’t chose Darmstadt. But I have two brothers here. It took time to say this was a place I could be in, but I feel at home here now.”

For the Syrian art student and filmmaker, his film was a way of saying thank you to the people of the city.

“I was trying to say that we Syrians are doing something. But we need time – time to learn the language and culture.

“I thought 'I have to do something to say thank you to Germany, I have to give something back'.

“I didn’t have any money, but I could give art.”