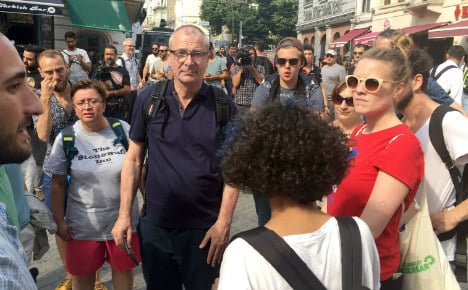 According to Volker Beck, an MP for the Green Party, he was violently manhandled by Turkish police during his arrest on Sunday evening.

Beck tried to stop the arrest of a gay rights activist who was attempting to give a speech in the centre of Istanbul.

He was then aggressively removed from the scene by police, according to a DPA reporter who was present.

Police made 29 arrests in all, according to the organizers of the demo.

A colleague of Beck’s in the Green party, Terry Reintke, a member of the European Parliament, was also arrested. Shortly afterwards both politicians were released.

Felix Banaszak and Max Lucks, both also members of the Green party, were held in detention for several hours but had been released by Sunday evening.

According to Beck there was no justification for the aggressive way in which the police acted.

“They ripped my passport away from me and pushed me around. It was a massive and arbitrary police attack that we saw,” said Beck.

Istanbul's governor had cancelled the traditional gay pride march through Turkey’s largest city on security grounds. But organizers nonetheless announced their intention to read out a speech on the Istiklal Caddesi, one of the busiest streets in the city.

The speech, later published on the internet, was sharply critical of the Turkish government.

Turkish police were ordered onto the streets in massive numbers to prevent the gathering from taking place.

Beck said that the actions of Turkish security forces make it harder for the EU to work with Ankara.

“That is simply not acceptable for a cooperation and for close friendship,” he said.

Beck was one of the most senior figures in the Green Party until he was caught by police in Berlin with the synthetic drug crystal meth in his possession.

The Green MP, who is a vocal member of the LGBT community, immediately gave up his role as domestic affairs spokesman for the party.