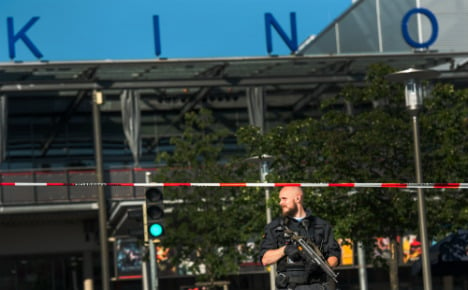 A police officer stands guard in front of the cinema in Viernheim. Photo: DPA

One of the weapons was a pistol the other was a rifle. He was also carrying a fake hand grenade.

The attacker was identified by prosecutors on Friday morning as a 19-year-old German born in the city of Mannheim, which is about a 20-minute drive from Viernheim.

Before his death he was living in northern Germany, prosecutors said.

Authorities have still given no further information as to a possible motive for the attack.

The incident was over within a couple of hours after the masked man entered the cinema and took 14 cinema-goers and 4 cinema employees hostage after firing several shots into the air.

Special forces flew in by helicopter from Frankfurt and surrounded the building.

Hesse's interior minister Peter Beuth told DPA that the man was shot dead after a struggle with police.

Early media reports on Thursday suggested that upwards of 25 people had been injured in the incident.

But Beuth confirmed later that all hostages had been freed without sustaining injuries.

Police from nearby Darmstadt said on Thursday that there was no evidence of an Islamist background behind the attack.