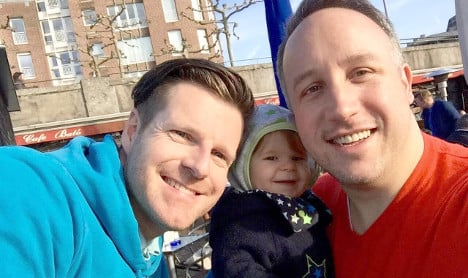 Cape Town native Stuart Logan sits in his newly-built Hamburg home, his babbling 15-month-old son Neo next to him.

“Neo’s been a project four years in the making,” Logan tells The Local over the phone as his son lets out a playful squeal.

“But it’s been worth every cent and every minute.”

Logan and his German husband Niclas Wagner receive almost all the benefits of a heterosexual couple starting a new family in Germany: they get Kindergeld (children support money) from the government, Wagner was granted parental leave from his work at an advertising firm and little Neo boasts a German passport despite being born in South Africa.

But the journey to get here wasn’t so straightforward, and there are still a few bureaucratic bumps in the road that eventually need smoothing.

That’s because, unlike most of its Western European counterparts, Germany still does not grant same-sex marriage or equal adoption rights, so gay couples often have to go a roundabout way to achieving what straight couples may take for granted.

And part of what helped make their dreams of starting a family possible was actually Logan’s expat status.

“No normal German gay couple could have done this,” Logan says.

Logan and Wagner’s love story began about seven years in a coffee bar in Frankfurt, where both now 37-year-olds had moved to for work.

In 2012, they decided to get married, and held the wedding in Logan’s native South Africa, where same-sex marriage has been legal since 2006.

“Part of this is because of Apartheid when being gay was illegal, so after Apartheid for all those who were discriminated against, it was turned around. This is why it’s so liberal in South Africa,” Logan explains.

Though Germany does not itself grant same-sex marriages, it does offer same-sex partnerships, and therefore they could have their status as a couple registered when they came back.

When they wanted to start a family though, things got a bit more complicated. Same-sex couples cannot adopt children together in Germany and it’s only possible for one partner to adopt the biological child of the other. But surrogacy is also illegal in Germany.

Knowing this might be a complication, they had even been advised not to double-barrel their last names when they got married so at least it might be easier for the parent who didn’t share the child’s name to adopt.

So the couple decided to find a surrogate mother and egg donor in South Africa, where it has been legal for years.

When the surrogate first became pregnant in 2014 from the anonymous egg donor and Logan, the pair still didn’t know if the child would be recognized in Germany.

“It was kind of an unclear area because there hadn’t been a Constitutional Court ruling,” Logan says. “But I didn’t care. We wanted to have a child and a family and would have fought it ourselves.”

But later that year, good news did come in the form of a court ruling.

The German Court of Justice ruled in December 2014 in favour of a gay couple whose child was born through surrogacy in California, where they were legally recognized as the parents. The court decided that for the child’s well-being, it would recognize their parenthood as California had.

This opened doors for Logan and Wagner as it meant that Germany should also recognize the law of the land in South Africa regarding their parenthood and surrogacy.

So before Neo was born, they found a lawyer and contacted the German embassy in South Africa, alerting them about what the ruling would mean for their family.

After Neo was born – and following some technical, bureaucratic issues with South African officials – they went to the German embassy to get his passport.

And within just five days, baby Neo had his very own German passport: Babies born to at least one German parent outside the country can get citizenship, and both Logan and Wagner have German citizenship.

“We had absolutely no problems, all because the law had changed in our favour,” Logan said.

'Name not yet finalized'

But despite the ease of getting the passport, some problems did arise when the new family moved back to Germany.

“When we went to register him in Hamburg, an unhelpful woman said we still needed to adopt the child,” Logan explains. “I said ‘well, my husband is German, I have German citizenship, our son is German,’ and I could see on her face the realization that we have rights.”

A year later, German authorities sent a letter requesting that in order to register Neo’s birth, the parents submit all the South African documentation proving Logan and Wagner are the parents and not the surrogate, but translated into German.

So because they couldn’t get a German birth certificate, Neo’s passport now actually states that his name “is not yet finalized”. So far this hasn’t been a problem, though it could be in the future for Neo.

For now, Logan said they are refusing to go through the trouble of translating everything and will wait to see how Germany responds.

“The most important thing for me is that he has a German passport and that he’s treated like a normal child in society.”

This also hasn’t been an issue in Hamburg, Logan says.

“Sometimes people do see us together walking down the street and say ‘O Mutti (mum) has the day off today’,” he says.

“Overall though, I feel like we live a very open and normal life and don’t get treated differently.

“Germany has the highest amount of paperwork and bureaucracy I’ve ever seen… but if you want a child, fight for it. It’s worth the fight,” he says as Neo starts to giggle.