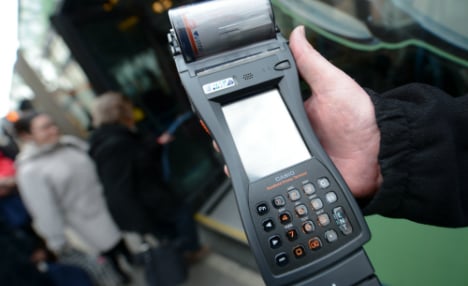 In May The Local reported on a Chinese woman who was bullied by plainclothes ticket collectors on Munich’s train line from the airport into the city into giving up her passport and paying a cash fine.

The young woman had just arrived in Germany and did not understand that she needed to stamp her rail ticket before boarding the train.

According to a journalist who witnessed the scene, the controller demanded a cash payment of €60 from the woman. When she said she didn’t have any money on her, he took her passport.

As the confused woman broke down in tears, he marched her off the train and in the direction of a police station.

Only when the journalist paid the fine for her was the ordeal over.

After the story broke, rail operator Deutsche Bahn (DB) was forced into an apology, claiming: “we train our employees specifically with regard to such situations of conflict, so that they may act appropriately whenever possible.”

But the accounts of two tourists who The Local has spoken to suggests this isn’t the only time conductors have demanded passports and cash payments from foreigners – both clear violations of DB rules.

Alexander Box and his wife were on the train to Munich airport after a weekend visiting friends in December 2015 when a plainclothes ticket collector approached them.

The couple from Milton Keynes, England had bought tickets from a machine in the city, but hadn't stamped them.

“It’s not at all obvious that you are supposed to stamp your ticket,” Box said. “In the UK there are big posters everywhere but in Germany there is one blue sign – if you blink you miss it.”

As soon as the conductors approached them, the couple had the feeling something was fishy.

“It didn’t feel at all legal. They weren’t wearing uniforms like conductors in the UK. It was very unofficial.”

Unlike on regional trains, conductors on inner city lines in Germany appear in plain clothes so as to make it easier to catch fare dodgers. But they should immediately show their badges and payment machines when they approach you.

For Box, it felt like they were not transparent enough. The conductor only showed his badge at a later point when the police arrived, he recounts.

“You could see in their faces that they had caught a couple of tourists – the airport route must be very lucrative for them.”

The conductor demanded that the couple pay a €120 fine in cash and when they refused, he got the police involved, with an officer advising them they would have to pay the fine.

After the officer left, the conductor decided to up the ante and demanded their passports.

“He didn't want our details, he wanted the passport.”

“I advised that my passport was the property of the realm and as a result he had no authority to remove it from my possession.”

In the end the inspector followed them all the way to the airport where he threatened to take them to the police station.

At this point the the couple gave up and handed over the money in cash.

The conductor insisted on payment in cash, Box said, and only gave over a receipt on their insistence.

‘My kids were scared’

A Malaysian family who visited Frankfurt at the end of a trip through East Europe were put through a very similar ordeal.

Dr. Choong Chooi Har told The Local that she arrived in the finance capital in early June.

After buying standard tickets, they boarded the train in the first-class section by mistake. The only way of knowing they were in the wrong section was a sign with the number “1” on it, which they failed to see.

A burly man who “acted more like a thug than an enforcement officer… barged into the coach and demanded to see our tickets”, Choong said.

“He shouted at us to get out of those seats. My kids were scared to see him and everyone in the coach was looking at us like we were criminals.”

The conductor told the family they would have to immediately pay a cash fine of €360, ordered them to give him their passports and marched them to an ATM in Frankfurt Central Station.

When Choong said she would only pay at an official Deutsche Bahn office, the conductor threatened to call the police. As the family believed they hadn't broken the law, they let him go ahead.

When officers arrived they advised the family to pay up front and lodge an appeal later.

So far their attempts to have their case heard have come up against DB employees who claim not to speak English and an online complaints form only written in German.

After not hearing back from the company in a week, Choong says: “I guess there's no hope.”

A spokesperson from DB in Munich told The Local that the conductors described in these accounts are probably con artists pretending to work for the company. Real conductors never demand cash, he said.

But both Box and Choong have shown The Local printed receipts marked with the DB logo, proving the conductors were the real deal.

When confronted with this information, the DB spokesperson responded that “if a conductor could be proven to have acted in this way we would have to explain the rules to him, and if he wasn’t receptive he wouldn’t work for us anymore.”

But he added that “at the moment these are just stories that someone has told” and advised the complainants to go through official channels.

For Box and his wife, a fantastic weekend in Munich was tarnished by their experience with the train conductors.

“You expect this kind of thing to be brilliant in Germany, with everything we associate with Germans, like efficiency. You don’t expect for one second this backward system of ticket stamping.

“I think a lot of tourists are getting trapped and these people are winning off the back of it,” he said.

But the experience still wasn't enough to put him off the country entirely. He will be back next winter for the Munich Christmas market.

Choong and her family are much more reluctant to step foot in Germany again.

“My husband has vowed never to return to Germany again after this humiliating experience.

“We are tourists spending money in your country. I think we should be treated with some respect and not like criminals.”

Directing her anger at Deutsche Bahn, she said: “train your ticket controllers in basic manners and simple courtesy. We've been on trains in many Asian and Western countries and this is the worst experience we’ve had.”