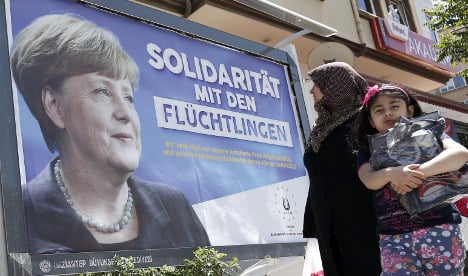 People in Gaziantep, Turkey walk past a sign with Angela Merkel that reads "Solidarity with refugees". Photo: EPA.

Syrian refugees in Turkey who have already received visas for Germany and even booked their flights to leave are being denied exit permits by Turkish authorities – the last step of the process to leave the country.

There have been more than 50 cases in the last few weeks of Turkey refusing to issue such exit permits, a spokesperson from the Interior Ministry told DPA.

“The reasons for the refusals for exit permits have not been stated,” the spokesperson said, adding that 292 others had been allowed to leave since April.

Der Spiegel previously reported that Turkey has been telling its immigration authorities not to allow highly-educated Syrians to leave. And the UN Refugee Agency has warned Turkey not to refuse the travel of educated Syrian engineers and doctors.

According to Spiegel, Turkey has instead been sending refugees to Europe who have serious medical conditions or little education.

Turkish officials also reportedly acknowledged at a meeting last week that highly-qualified people “of a high political level” should not leave the country, and that they check the professional qualifications of people when considering their requests to travel, EU sources told DPA.

The sources explained that Turkish immigration authorities (DGMM) had said they did not want the Turkish population to get the impression that only highly-educated refugees were going to Europe. But at the same time, many Syrian professionals have not been allowed to practice their work in Turkey.

Turkey put forth new regulations in January to issue work permits for Syrians, and the government said last month that 10,300 permits have been issued to Syrians. But Turkey is currently home to some 2.7 million Syrian refugees.

What’s more is that it is the DGMM that places Syrians on the list for departure, but then also has been denying their exit visas at the last minute.

The EU and Turkey agreed in March to a controversial resettlement plan to reduce the number of refugees coming into Europe. The plan means that Turkey has been taking back irregular immigrants who pass from its shores to Greece. And in a one-for-one exchange, the EU is taking in one recognized Syrian refugee for each irregular Syrian immigrant that Turkey takes back.