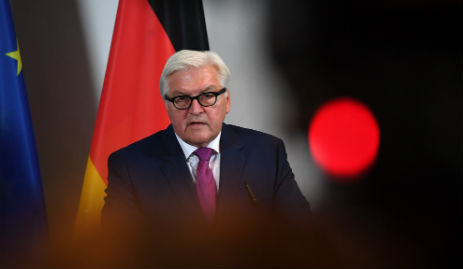 German Foreign MinisterFrank-Walter Steinmeier. Photo: DPA/Ralf Hirschberger
Steinmeier pointed to the deployment of NATO troops near borders with Russia in the military alliance's Baltic and east European member states.
“What we should avoid today is inflaming the situation by warmongering and stomping boots,” Steinmeier told Bild in an interview to be published Sunday.
“Anyone who thinks you can increase security in the alliance with symbolic parades of tanks near the eastern borders, is mistaken,” Germany's top diplomat added.
NATO had announced on Monday that it would deploy four battalions to Estonia, Latvia, Lithuania and Poland to counter a more assertive Russia, ahead of a landmark summit in Warsaw next month.
All four countries were once ruled from Moscow and remain deeply suspicious of Russian intentions, especially after Russia's annexation of Crimea from Ukraine in 2014.
In an interview with Bild on Thursday, NATO chief Jens Stoltenberg said Russia is seeking to create “a zone of influence through military means”.
“We are observing massive militarisation at NATO borders — in the Arctic, in the Baltic, from the Black Sea to the Mediterranean Sea,” he told the newspaper.
Stoltenberg has stressed that NATO does not seek confrontation with Russia and wants a constructive dialogue but that it would defend the 28 allies against any threat
Russia bitterly opposes NATO's expansion into its Soviet-era satellites and last month said it would create three new divisions in its southwest region to meet what it described as a dangerous military build-up along its borders.