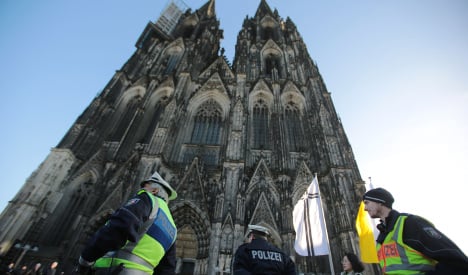 The suspects aged 26 to 30 years were making a stop at the western city of Cologne after leaving Marseille, where the worst violence at an international tournament since the 1998 World Cup in France erupted last Saturday between Russian and English football thugs.

The men who had arrived on a train from Brussels were supposed to fly back to Moscow through Cologne-Bonn airport.

Outside the city's iconic cathedral, the men attacked two Spanish tourists and their Spanish guide in an “extremely aggressive and brutal manner” on Thursday evening, according to police.

The Spaniards had been handing out stickers for a left-wing campaign.

The Russians “beat and kicked” their victims, leaving one seriously wounded with a broken nose, police said, without giving details on what sparked the attack.

Police managed to arrest five assailants on site, but one got away. The sixth was subsequently arrested at Cologne-Bonn airport, where the suspects had been due to board a flight.

“And with that, we have them all,” a police spokesman said upon the arrest of the last man.

The men had European Championship tickets for two Russian matches against England and Slovakia, and were carrying “typical objects used by hooligans including masks and gumshields”.

The men are believed to be part of an extremist Russian group and had flown to Marseille on June 10th, the day when the competition began.

German police said they will contact their French colleagues to determine if the men had been involved in the fan violence that has plagued Euro 2016 in France.

A French court on Thursday jailed three Russian football supporters over Euro 2016 fan unrest while a far-right Russian agitator was thrown out of the country.