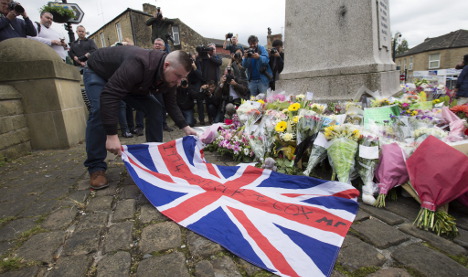 A Union Jack flag is laid down by a member of the public near where British MP Jo Cox was shot and fatally wounded in Birstall, Britain. Photo: EPA.

“The exaggerations and radicalisation of part of the language do not help to foster an atmosphere of respect,” she said, in response to a question on the killing of the British lawmaker Jo Cox.

“Otherwise the radicalisation will become unstoppable,” warned the German leader.

Campaigning for Britain's June 23rd EU referendum was suspended on Friday for a second day as the nation reeled from the killing.

Some commentators questioned whether the killing could be linked to a campaign that has stoked tensions by touching on issues of national identity and immigration.

Witnesses told media the campaigning mother of two had been shot and stabbed.

A 52-year-old man, named by British media as Thomas Mair, was arrested.

Described by neighbours as a loner, there were indications that he may have extreme right-wing leanings.

Cologne mayor Henriette Reker – who herself survived an assassination attempt by a neo-Nazi last year – also spoke out to express her condolences.