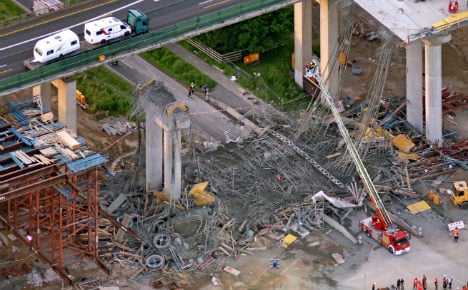 The site of the collapse looked like a building after a bomb had hit it, a spokesperson for the Bavarian interior ministry said.

Tangled steel wires hung limply from the concrete columns of the 20 metre-high bridge. Construction materials were scattered, bent and strewn, across the basement of the gorge. Huge masses of concrete lay crumpled in on one another.

On Wednesday, shortly after 4pm, an entire section of a new bridge being constructed on the A7 near Schweinfurt collapsed, shortly after it had been laid.

A 40-metre section of road fell 20 metres on the the valley floor below, pulling dozens of construction workers with it.

One man lost his life, a further 15 people were injured, six of them seriously, a spokesperson for the Bavarian interior ministry said.

Gallery: 7 photos of the aftermath of Bavaria's Autobahn bridge collapse In the aftermath, helicopters came and went in a continual cycle, as 150 personnel from the fire service and other emergency services have been involved in the rescue and clear up.

Dogs searched through the wreckage for bodies while a voice called over a microphone: “Warning, warning! Absolute silence on the building site.”

All missing people had been accounted for by Thursday morning, officials said.

“I want to express my deepest sympathies to the relatives of those affected,” said Bavarian interior minister Joachim Herrmann.

The bridge has been under construction since 2015 and is meant to replace another bridge which will be demolished.

“I’ve never seen such a thing, a real field of rubble like when a building has been blown up by a bomb,” said Gerhard Eck from the Bavarian interior ministry.

“If it turns out that human or technical error was to blame then we must look into the finest details of the case,” he added.

It was revealed in January that every fourth bridge in Bavaria needs to be repaired.