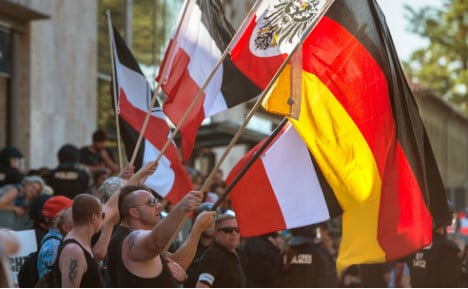 One in every ten Germans wants their country to be led by a 'Führer' who applies a firm hand for the common good.

Eleven percent of respondents say that Jews have too much influence in society.

Twelve percent think Germans are by nature superior to other people.

Four in ten people think Muslims should be prohibited from immigrating to the country.

These are just some of the more hair-raising findings of the study, which the University of Leipzig has been carrying out at regular intervals since 2002. Islamophobia on the rise

Hostility to Islam has shown a particularly marked increase since the last report in 2014, when 36.6 percent of people didn't want more Muslims migrating to Germany.

Half of respondents in the most recent survey of 2,240 people also said they feel like “foreigners in their own country” because there are too many Muslims. That result marked a seven percentage point rise from the 2014 poll.

Overall, three in ten complained that Germany had been “infiltrated by too many foreigners in a dangerous way”, added the survey, which was carried out after a year in which Germany opened its doors to a record 1.1 million asylum seekers.

Skepticism appears to be running high against migrants, with three in five Germans saying that most asylum seekers “are not really at risk of any persecution in their home country”.

“There has been no increase in extreme right attitudes, but in comparison with our study from two years ago people who have far-right attitudes are more prepared to use violence to achieve their aims,” Dr. Oliver Decker, one of the report’s authors, notes on the university website.

The report also claims to have found ”a clear polarisation and radicalisation” in German society, with more respondents also likely to completely reject violence this time around.

Titled “the uninhibited middle”, the study argues that extremist ideology has become more acceptable in mainstream German society, leading to the increased popularity of the Alternative for Germany (AfD) party.

“Most AfD voters have a hostile attitude to the world,” report co-author Dr. Elmar Brähler said.

Racist attitudes are also highly prevalent among people who up until this point have not voted, the study shows, with almost 30 percent likely to harbour xenophobic opinions.

“The potential for extreme right or populist right-wing parties is still higher than what electoral results have yet shown,” Brähler stated.

The survey noted an increase in negative attitudes towards Roma or Sinti communities, with half of respondents saying people from such groups should be banned from city centres.

Homophobia also appears to be on the rise: 40 percent of people said they found it disgusting when gay people kissed in public, an increase from 25 percent in 2011.