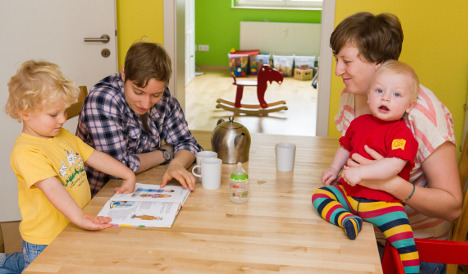 A lesbian couple and their children in Stuttgart. Photo: DPA.

The Federal Court of Justice on Wednesday granted German citizenship to a South African child born to lesbian mothers in a major development for LGBT family rights.

The court case centred around a child born in 2010 in South Africa to a lesbian couple – the biological mother was South African while the other mother was German.

The parents were legally married in South Africa and therefore were automatically recognized equally there as the child’s parents.

But when the mothers went to Germany to register their partnership, authorities in Berlin refused to offer the child German citizenship because the biological mother was foreign.

Children born to at least one German national outside the country are normally considered German citizens within heterosexual pairs.

But unlike heterosexual couples in Germany, same-sex partners cannot marry and therefore any child had or adopted by a pair is not automatically considered the child of both.

The only way that same-sex couples can start a family together is through something called successive adoption – generally one partner adopting the biological child of the other.

The German mother had not done this in her home country.

Ultimately the judge decided to recognize the laws of South Africa where the child normally resides and where both parents have equal custody. Therefore the child was granted German citizenship.

Germany tends to lag behind most of its Western European neighbours as the question of legalizing gay marriage remains unanswered in the Bundesrepublik. South Africa has granted same-sex marriages for nearly a decade.

SEE ALSO: Why Germany is 'scared' to take the lead on gay rights