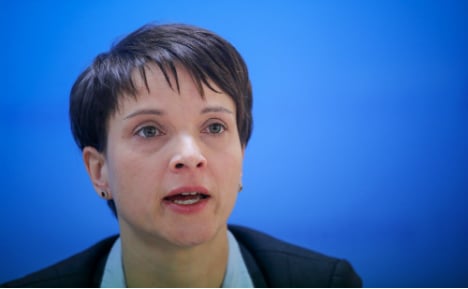 Turn on your telly in the evening in Deutschland and you’re almost guaranteed to be confronted by a group of late middle-aged people talking very earnestly about very serious things.

Whether it's an episode of Anne Will, Hart aber Fair, or Maybrit Illner, Germans seem to have an insatiable appetite for lengthy discussions on a tiny number of political talking points.

With the same small carousel of faces appearing over and over, the sense of déjà vu can be nauseating.

Sahra Wagenknecht, the telegenic leader of the opposition Left Party, has been sternly reprimanding the government from a red-cushioned sofa for years.

Katrin Göring-Eckardt, the kindly face of the Green party, must rarely get home till after midnight.

And recently a new face has been beamed into our living rooms – that of Frauke Petry, the leader of the populist Alternative for Germany party (AfD).

With the AfD soaring in the polls, and the anti-migrant party's leader always good for a fiery quote, Petry is a ratings no-brainer.

But with arguments thrown hither and thither without an independent voice calling politicians out when they stray from the facts, the viewer's post-supper brain can be reduced to a well-mushed soup.

But now help is at hand, thanks to a team from the Cologne Journalism School.

Researchers there looked at talk show appearances between December 2015 and March 2016 and rated 351 statements from seven leading politicians for their accuracy.

But 14 percent of the time they would say things which were categorized as either “largely false” or “false” – meaning one in every seven statements made by a lawmaker was a fib.

But the findings went further, showing that some politicians were much more likely to spin a yarn than others.

Petry appeared in three of the talk shows and lied or half-lied almost a third of the time.

The next biggest fibber was Markus Söder, the ambitious young finance minister of Bavaria. He told a porky or partial porky 22 percent of the time.

And, quite contrary to opposition claims that the government are a bunch of slippery Ne'er-Do-Wells, the leading government figures put under the microscope were most likely to stick to the facts.

Armin Laschet, deputy leader of Angela Merkel’s Christian Democratic Union (CDU), was found to “only” fib or partially fib 6.5 percent of the time.

Slightly more Pinocchio-esque, but still better than the average politician, was Thomas Oppermann, parliamentary head of the Social Democratic Party (SPD), the junior partner in the coalition government. He had a lying quota of 9.1 percent.

The report's authors also note that some political parties were more willing to provide an explanation for their leaders' tall tales when asked about them than others.

While the CDU and Greens delivered detailed explanations to 20 untrue statements which the Cologne team brought to their attention, the AfD replied that “due to scheduling pressures placed on Dr. Petry, she is unable to provide detailed answers to the points brought to attention here.”