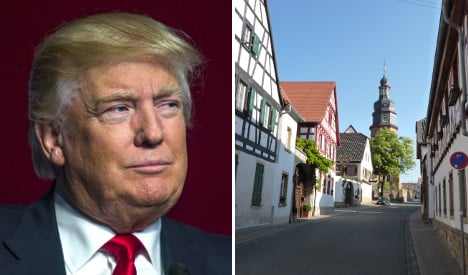 The presumptive US Republican presidential nominee's grandparents grew up in this hamlet nestled in Germany's southwest but left for America more than a century ago fleeing poverty and later, after a brief return, trouble with the law.

Today, no plaque hangs on the modest white houses where they grew up opposite each other on Freinsheimer Strasse, then called Engelsgasse (Angel's Lane), and no street bears the Trump name.

But in a year that could wind up with the brash billionaire becoming the leader of the free world, Trump is the talk of Kallstadt, population 1,200.

“The Trumps got rich off real estate, that is a major achievement but none of them still live in town. Why should we be proud of that?” Mayor Thomas Jaworek, 48, asks.

“If he becomes president, let's see what he does for America and the world. Then maybe we'll hang a plaque.”

The erstwhile Drumpf family simplified its name around 1700 to Trump, long before Donald's grandfather Friedrich set off for the United States at the age of 16 in 1885, according to biographer Gwenda Blair.

Leaving only a farewell note on the kitchen table, he joined his sisters in New York, then went out west during the Gold Rush, opening taverns offering food, drink and female companionship to lonely fortune seekers, Blair said.

Friedrich, who anglicised his name to Frederick, shipped gold nuggets back east to his sisters who used the proceeds to buy property, laying the foundations of the family empire.

Frederick returned to Kallstadt a wealthy man, married the neighbours' daughter Elisabeth Christ and whisked her off to New York.

Her homesickness, however, would soon bring them back to Kallstadt. But because Frederick had left Germany before completing his obligatory military service, he and his heavily pregnant wife were forced to return to the US in 1905, according to historian Roland Paul.

A quirk of history would have it that two of America's best-known self-made men came from the same small town, as the patriarch of the Heinz ketchup dynasty also hailed from Kallstadt.

Retired vintner Hans-Joachim Bender, 74, descends from a grandmother in the Trump clan and a grandfather who was a Heinz but sees little family resemblance.

“What do I think of Trump's policies? I'd better not say,” he said, sitting in his dining room as the sun set over the vines.

“Blowing hot air is not everyone's thing. I think Hillary (Clinton) is a bit less… radical,” he added, referring to the rival Democratic presumptive nominee.

The Trumps long claimed to be of Swedish stock due to anti-German sentiment in the US during the world wars and in the aftermath of the Holocaust.

However, filmmaker Simone Wendel, who made a light-hearted 2014 documentary about her hometown's famous sons called “Kings of Kallstadt”, managed to cajole Donald to appear on camera at his Manhattan office in Trump Tower and discuss his German roots.

“The people in Kallstadt are very reliable, strong people and I feel that about myself – I'm strong and I'm very reliable. I'm on time, I get things done,” he says in the film.

Trump also promises to pay his first visit to Kallstadt the next time he's in Germany.

“I'm proud to have that German blood, there's no question about it. Great stuff.”

Tourists, including many GIs on leave from the nearby US air base Ramstein, can choose from a range of quaint locales such as Pig Stomach Cellar, Pig Stomach Lounge and the Pig Stomach Paradise deli.

Working behind the meat counter, Edelgard Kellermann, 62, says the Trump phenomenon has attracted visitors from as far afield as Vietnam.

“It keeps things from getting boring around here,” she said with a smile.

Her expression darkens, however, when asked about Trump's calls to build a wall on the Mexican border to stop illegal immigration and his attacks on German Chancellor Angela Merkel over her “insane” decision to open the doors last year to more than one million asylum seekers.

“Mr Trump is a descendant of a refugee – his forebears left here for economic reasons, to have a better life. He (Donald) has it even better and should give others the same chance,” she said, calling him a “demagogue”.

One month ago, tiny Kallstadt took in its first refugees, a Syrian family of four.

“The fact that we now have a family who lived in refugee camps for a long time and who has now found a home in Kallstadt – that is a beautiful thing and we are happy about it.”

But Kallstadt's denizens, known in the regional dialect as “Brulljesmacher” or braggarts for their relative wealth and success, are mostly taking all the Trump hype on the chin.

During carnival season in February, the local newspaper ran a tongue-in-cheek article saying Trump would build a giant golden tower to dwarf the village's church steeple, complete with a 55th-floor terrace to host an annual wine festival.