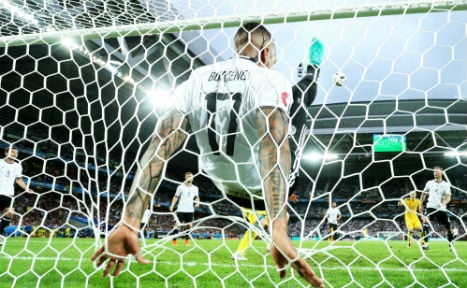 “It’s good when you have a neighbour like Jerome Boateng in defence,” Löw said directly after the game of the Berlin-born defender, whose father is Ghanaian.

The Germany coach was having a none-too-subtle dig at Alexander Gauland, deputy leader of the far-right AfD, who said recently that most Germans wouldn’t want Boateng as their neighbour.

In the first half of the match, which Germany eventually won 2-0, Boateng spectacularly cleared the ball from the German goal line, while falling over backwards.

At that stage Germany were only winning by a single goal and Ukraine were putting ever more pressure on the world champions.

Many people on Twitter also mocked separate comments by Gauland, who said last week that the national team was no longer German “in the classical sense.” Commenters noted that the player who scored the first goal of the game was Shkodran Mustafi, who was born to Albanian parents.

“If Gauland had his way, it would still be 0-0,” tweeted Katrin Göring-Eckardt, co-leader for the Green Party in the German parliament.

After Boateng made his decisive intervention, Göring-Eckardt posted the follow-up: “..and if Pegida had their way, it would now be 0-1.”

And with Mesut Özil – another national team player criticized by the AfD for a recent pilgrimage to Mecca – setting Bastian Schweinsteiger up for the killer goal in the dying minutes, there wasn’t much to smile about for the traditionalists on the right of German politics.

German hooligans cause trouble in Lille

Despite the ethnic diversity of the national team, they appear to remain an attraction for far-right thugs.

German police stopped 21 hooligans, who were attempting to travel to France, before they crossed the border, broadcaster N-tv reports.

Some of the men, all of whom are on a national watch list, obtained tickets through false names. Balaclavas and face masks were found in one of the cars.

Nonetheless, more than 50 German hooligans attacked Ukraine fans before the match in the streets of Lille, where the match was held.

Witnesses spoke of seeing bottles, chairs and smoke bombs being thrown. Some of the hooligans were also heard chanting far-right slogans.

Representatives of the German police who were present in Lille said that the situation was not comparable to scenes witnessed in Marseilles recently where Russian and English fans fought street battles over several days.