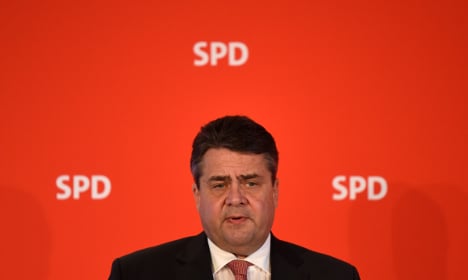 “Everything that they have said, I have already heard before — from my own father, who was a Nazi to his very last breath,” Sigmar Gabriel, who is also leader of the Social Democrats, told the Funke media group.

“People like Mr Gauland remained quiet as long as they could continue to build their career in the CDU,” said Gabriel, referring to the AfD's deputy chief Alexander Gauland, who was once a member of Chancellor Angela Merkel's Christian Democratic Union.

“Once everything was over, they brought back their old German nationalist slogans,” said Gabriel.

“These are people who oppose this country's openness to the world and liberal attitudes.

“They want to go back to the stuffy and uptight old West German Republic of the 1960s: when women were still at home, when foreigners, gays and lesbians had to make themselves invisible, and when Wehrmacht songs were sung in the evenings over beers. Dreadful,” he said.

Gauland last month sparked an uproar over his remarks against Jerome Boateng, who has a Ghanaian father and who was born and brought up in Berlin.

“People find him good as a footballer, but they don't want to have Boateng as a neighbour,” said Gauland.

The AfD, founded on a eurosceptic platform three years ago, has shifted gears to protest against Germany's record refugee influx that last year brought more than one million asylum seekers to Europe's top economy.

The party, which has won seats in a series of state elections, declared last month that “Islam does not belong to Germany” and said it wants to ban minarets, the call of the muezzin and the full facial veil.

Having entered half of Germany's 16 state parliaments, the AfD — seen as the country's answer to France's National Front and Austria's Freedom Party — has now firmly set its sights on national elections next year.