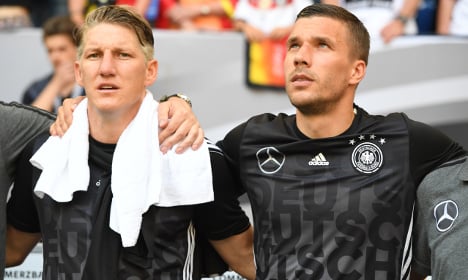 Joachim Loew's Germany can not even claim to be the team at the Euro 2016 finals with the most players from the Bundesliga.

The Austrian squad matches the Germans by having 14 of their 23-man squad signed to clubs in Germany's top flight.

Only the addition of Bayer Leverkusen's Jonathan Tah for knee-injury victim Antonio Ruediger of Roma on Tuesday boosted the number of players in Die Mannschaft's squad who play at home.

Not since 1992, when the Germans lost 2-0 to Denmark in the European Championship final with eight Italy-based players in the squad, have so many Germany stars played abroad.

But the eye-catching football played by Loew's young lions in finishing third in South Africa meant that by the time Brazil 2014 kicked-off, seven of the squad played outside Germany.

Daily newspaper Bild sees the growing trend of home-based stars quitting the German league as bad for Bundesliga business, worrying about a drain of talent heading to Europe's top teams.

“The legionnaires (nickname of those playing abroad) is good for Jogi (Loew), but fatal for the Bundesliga,” moaned the headline in the nation's best-selling paper.

The counter argument is that seven of the Germany squad play for Bundesliga champions Bayern Munich.

But there is no denying a multi-cultural look to the current squad with nine members of the Germany squad either the sons of immigrants or having parents with roots overseas.

Tah, whose father is from the Ivory Coast, replaced Ruediger, whose mother is from Sierra Leone.

Both Germany-born Mario Gomez and Mesut Ozil are the sons of Spanish and Turkish immigrants respectively.

The ethnic diversity of the world champions' squad has drawn unsavoury comments from Germany's right-wing party Alternative for Germany (AfD).

Arsenal's Ozil, a devout Muslim, was criticised by AfD co-leader Frauke Petry for not singing the national anthem and she accused him of peddling a political Islamic agenda.

The attack came on the heels of racially disparaging remarks about Germany defender Jerome Boateng from another AfD politician.

The response of 'Die Mannschaft' has been dignified with the squad releasing a video showing the squads faces merging into one under the motto 'We Are Diverse'.

“What is good for Germany is to have players in very good clubs, no matter whether in Germany or elsewhere,” said Schneider on Friday.

“The departure of players overseas can also give opportunities to young German footballers have their chance at their club and play earlier in the Bundesliga.

“This is the market, we must accept it.”

His sentiments were echoed by Wolfsburg winger Andre Schuerrle, who was still a Chelsea player when his cross saw Mario Goetze score the winning goal in the 2014 World Cup final.

“When one goes abroad, you get an additional extra experience,” said Schuerrle, who spent two seasons at Chelsea.

“It also helps teams to have (players who have known) different influences and different coaches.”

Besides any German fan bemoaning the lack of home-based players only needs reminding that team manager Oliver Bierhoff played for Udinese when his goal won the Euro '96 title at a Wembley final.