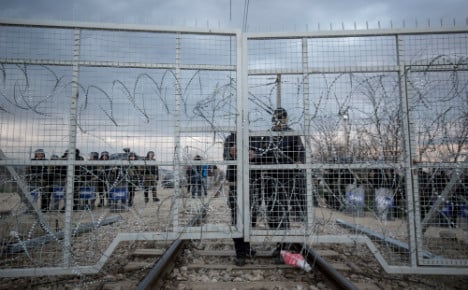 The Greek-Macedonian border has been closed for much of the year. Photo: DPA

“Isolation is what would ruin us – it would lead us into incest,” the finance minister told Die Zeit, doing a good imitation of a doomsday preacher.

The comments were meant as a resolute defence of his government’s migration policies, against the hostile attitudes of many Germans towards the Muslim faith practised by many migrants who move to Germany.

“Muslims are an enrichment of our openness and our diversity,” he continued. “Look at the third generation of Turks, especially the women. That is an enormous innovation potential.”

During the interview he also argued resolutely for more economic engagement with the Middle East and Africa, saying that Europe ignored these regions for decades.

“North African countries are already demanding this [economic investment] from us as a condition for taking refugees back. And they are right to do so.”

Brothers from another mother?

But many people have been left puzzled about the septuagenarian's reference to incest.

Would closing Germany’s borders really lead to a population of 80 million people being left with no choice other than to fornicate with their nearest and dearest, Tagesspiegel asks.

This dogmatic statement mirrors the logic of the right-wing Alternative for Germany (AfD), who argue that mass migration threatens German culture, argues the Berlin newspaper.

Tagesspiegel was also surprised by the racial terms in which the Christian Democratic Union (CDU) politician spoke.

Tagesspiegel also compared Schäüble's comments to those of Turkish president Recep Tayyip Erdogan, who said earlier this week that German MPs of Turkish heritage had “tainted blood” after they voted for a resolution recognizing the Armenian genocide. The newspaper argued that “what outraged Erdogan – mixed blood – is seen by Schäuble as the saviour of the German people.”

On Twitter, the finance minister's comments were also met with much derision.
Irascible right-wing politician Erika Steinbach said: “Bloody hell! I had no idea I was sooo closely related to all Europeans. I really must do some research in genealogy.”

A user who called himself Nimble Navigator meanwhile wrote “the effects that inbreeding can have” above a rather unflattering picture of the finance minister.