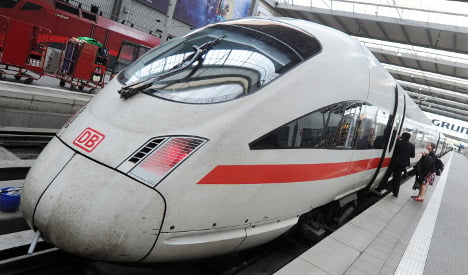 You may be able to say bye-bye to train drivers for good quite soon. Photo: DPA.

“I estimate that by 2021, 2022, 2023 or so, we will be able to have a portion of our network that drive completely automatically,” Deutsche Bahn (DB) chairman Rüdiger Grube told the Frankfurter Allgemeine Zeitung on Thursday.

“Automatic driving on a complex rail system where there are fast and slow passenger trains as well as cargo trains is harder than an U-Bahn [underground train system] – but it is possible.”

The first pilot project for the self-driving trains has already begun in a test field built in the Ore Mountains, near the border with the Czech Republic.

DB has also started preparing its workers for the fact that their trains will no longer need them in the future, saying they’ve begun talks with labour representatives and unions.

“The employee organizations and unions recognize that the digitalization of the world is changing things,” Grube said.

The German government as well as top German car-makers like Audi and BMW have already been putting self-driving technology to the test for cars. The Transport Ministry last year set up a section of the Autobahn to test out driver-less vehicles.

The DB train boss said that if the rail industry wants to stay competitive with what’s happening on the Autobahn, they cannot simply sit by and watch.

“Otherwise we will fall increasingly behind in productivity. But we want to inspire our customers with modern technology.”

Another aspect of the digitalization of the industry that DB wants to pursue is to better use the data they collect and to work with startups on things like digital transport cards and e-commerce.