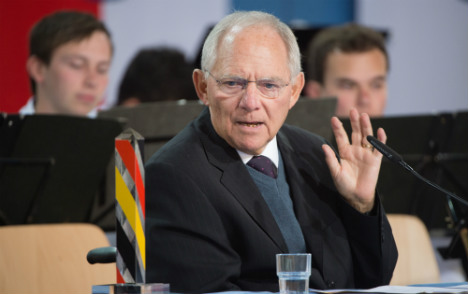 “That won't work,” the veteran minister told Germany's Der Spiegel weekly, which on Saturday plans to publish a German-English edition at home and in Britain with “Please don't go!” on the cover.

“That would require the country to follow the rules of a club which right now it wants to leave.”

If a majority of Britons opt for a Brexit in the June 23 referendum, it will shut the nation out of the single market with its free movement of people, goods and services, Schäuble said.

“In is in. Out is out,” he told Der Spiegel, Germany's top selling weekly news magazine.

The polls are on a knife's edge ahead of the referendum on whether Britain should stay in or leave the 28-country bloc.

Schäuble warned that a Brexit could spark contagion in the EU, according to excerpts of the interview due to appear in Der Spiegel's Saturday edition.

“How, for example, would the Netherlands react, given its traditionally very close ties to Britain?” he said.

Whatever the outcome, he added, the EU must show it has learned lessons from the British referendum.

“In response to a Brexit, we couldn't simply demand further integration,” he said.

“That would be clumsy. Many people would rightfully ask whether we politicians still haven't got the message.”

Even if a Brexit is narrowly averted, he said, “we would have to see it as a warning and a wake-up call not to continue with business as usual.”

Schäuble warned that a Brexit would hurt all sides, saying that “it would be a miracle if a British withdrawal would not have economic disadvantages”.

On the continent, he said, eurozone finance ministers “are preparing for all possible scenarios in order to limit the dangers”.

But if Britain leaves, Schäuble added, Europe in the end “will manage without Britain”.