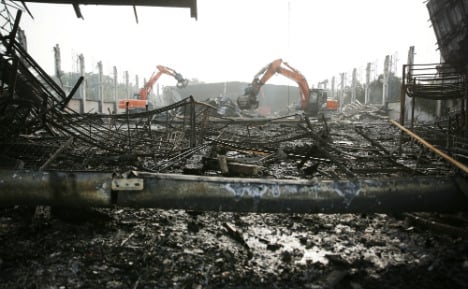 Debris is cleared from the sight of the fire. Photo: DPA

The huge blaze in the western city of Düsseldorf on Tuesday completely levelled a hall that housed 282 male asylum seekers mostly from Syria, Iraq, Afghanistan and North African countries, with 28 people suffering from smoke inhalation.

Police have detained eight men allegedly involved in the dispute, including two men suspected of arson, both Moroccans aged 26, one of whom allegedly poured a flammable liquid onto a mattress and set it alight.

Witnesses reported that there had been recurring tensions between followers of different religions in the Red Cross-run facility.

“During this time of Ramadan, there was one group that wanted to strictly observe the fast, and another that insisted on the usual timetables and usual servings,” said Ralf Herrenbrück, spokesman for the prosecutors service.

“This had led on several occasions to disputes and altercations with officials of the German Red Cross,” he said in an interview with public broadcaster WDR.

“It got to the point where threats were made over what would happen if things didn't change, and that one threat was obviously implemented.”

Since the start of the year, police had been called 89 times to the 6,000-square-metre hall, which was formerly part of the city's congress centre, reports said.