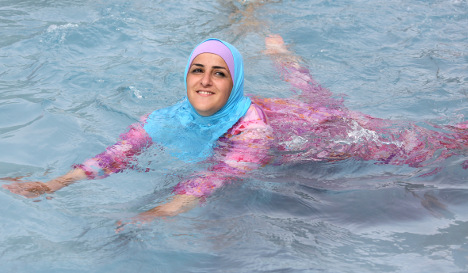 A woman swimming in a burqini in Berlin. Photo: DPA.

The ban was imposed after the pool in Neutraubling held a women-only swim day, the Mittelbayerische Zeitung reported last week.

One young woman chose to swim and do water aerobics in a burqini, eliciting loud complaints from the other women there.

The complaints reached the town officials, who decided to place a ban on the burqini as ‘non-typical’ swim attire.

“Why the burqini as a full-body suit would be necessary to wear during a women’s swim day is for me incomprehensible,” town mayor Heinz Kiechle said.

The newspaper reports that the young woman, who witnesses described as a good swimmer, has not returned to the pool.

The mayor told the newspaper that the ban has to do with a policy that requires “only generally typical apparel” to be worn, giving no exceptions to Muslim women.

The burqini is designed to be a more modest swimsuit for women, covering most of the body, except for the face, and somewhat resembles a wetsuit.

Mayor Kiechle further said that because the pool is financed publicly for all citizens, it would not make sense to make special arrangements for individual religions that may adversely affect the general public.

“This also contradicts the fundamental ideas of integration and mutual understanding, which is always being discussed in many towns.”

He also said that another reason for the policy was because some refugees had reportedly tried to go swimming in only underwear, but the newspaper said the lifeguards could not confirm this.

The ban has since stirred up controversy, with some calling for its repeal, citing the German Basic Law of fundamental rights for religious freedom.

“We see this case not only as a clear violation of fundamental rights,” wrote the Green Youth party in a letter calling for an end to the ban, “but also as a blow to humanity and tolerance.”