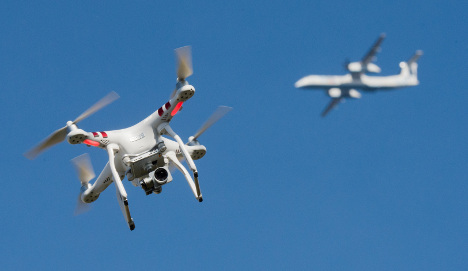 Picture of a drone. Photo: DPA.

A spokesperson for the Federal Criminal Police Office (BKA) told newspapers under publishing group Redaktionsnetzwerk Deutschland (RND) that drones may be the way of the future for attackers.

“Conceivable scenarios in which drones could be used range from disturbances of events and general criminal use for reconnaissance, up to possible terrorist attacks, including at major events,” the BKA spokesperson said.

The investigative police agency is therefore paying careful attention to the market for drone defence systems and is also “pooling the knowledge of states and the central government about detection of and defence against drones”.

Bayern Munich is also taking precautions for the football team, according to the publishing group, and is currently in talks with defence company Rheinmetall to buy electromagnetic impulse-defence devices to protect the team stadium from drones.

But the media director for the club refused to comment to RND about it, saying just that the public could be “assured that we will do our duty to secure major events thoroughly”.

The media director for the German Football Association (DFB) said that “for operational reasons” he would not comment.

The European Championship football finals in France starting on Friday are also supposed to be using anti-drone technology at the stadiums.