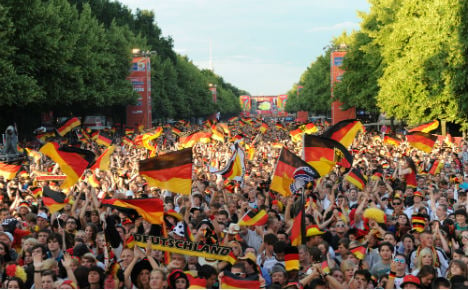 If you would normally rather spend your free time staring at a corpse than going to a German 'Public Viewing' – which means watching football with thousands of other fans in the street – you’re going to need help over the coming weeks.

The European Championships are kicking off on Friday, with Germany playing their first match on Sunday against Ukraine.

As anyone who lived in Germany during the last World Cup can’t fail to have noticed, the people of the Bundesrepublik are mad about their football.

So if you don't want to feel completely left out, you’d better know at least the basic facts.

But we want you to do better than that. Take this list in and broadcaster ZDF will be trying to hire you to replace Oliver Kahn on the pundit's coach.

Germany are champions of the world.

They won the 2014 World Cup in Brazil in style, humiliating the hosts 7-1 along the way, before beating Argentina 1-0 in the final.

So surely no piddly European team can stand in their way, especially the likes of Northern Ireland, Poland and Ukraine, all of whom have the misfortune of being in the Weltmeister's group. Bastian Schweinsteiger hold up the world cup in 2014. Photo: DPA

If only it were that easy. As is often the case in international football, a great team is often on the decline before they’ve even won anything.

Within days of that glorious World Cup achievement in Rio, captain and star player Philipp Lahm announced his retirement.

Two other stars of that team still in the squad are Bastian Schweinsteiger and Lukas Podolski. But German journalists have disparagingly referred to them as ‘mascots’ due to their age and poor injury records.

Germany’s best player couldn’t be more ordinary. If that sounds like a paradox, you're not the only one who’s puzzled.

Most pundits can’t quite put their finger on why Thomas Müller is so good. He’s not particularly fast, nor can he dribble that well – both major setbacks for a striker.

But fans at his club, Bayern Munich, call him the “€100 million man”, a reference to the amount Manchester United tried to pay for him last summer, and coaches at club and national level consider him irreplaceable. He may share a name with 700,000 other Germans, but make no mistake, this 26-year-old striker is something special. He has already scored 32 goals in 71 appearances for his country.

The curse of the Azzurri

Germany are still waiting for a first win over Italy at a major tournament in nine meetings – they have won none of their three matches at European Championship finals, or five at a World Cup, against the Azzurri (nickname for the Italian national team, by the way).

At France 2016, the two European powerhouses could potentially meet in the quarter-finals.

Don’t say it too loudly, but Germany are often pretty rubbish at the Euros.

While they have advanced to the knockout stages in every one of their World Cup appearances, in the European Championship they have suffered group stage exits three times: finishing third in their section in 1984 and 2004, and bottom in 2000.

…But then again, they're still Germany

Sorry England fans, but we are talking about the four-time World Champions here, so don’t get too ahead of yourselves.

The Germans hold the joint record with Spain of having won three European Championships. Die Mannschaft have also won 23 of their 43 finals matches, more than any other team.

But despite their excellent record, Germany failed to win a finals match between winning the Euro '96 final in London and beating Poland in Klagenfurt in 2008 with three draws and three defeats. Joachim Löw will have been head coach of Germany for a decade after Euro 2016 and has won 66 percent of his 131 matches with 87 victories, 22 draws and 22 defeats.

Only Spain's coach Vicente Del Bosque has a better win-ratio of 80 percent, with 87 victories in his 109 matches, of the top coaches at Euro 2016.

Germany are set to be the only team at Euro 2016 to have a yoga teacher in their back-room staff.

Munich-based yoga guru Patrick Broome, who has worked with music stars Madonna and Sting in the US, will take them through daily sessions to help them avoid injuries with stretching sessions in France.