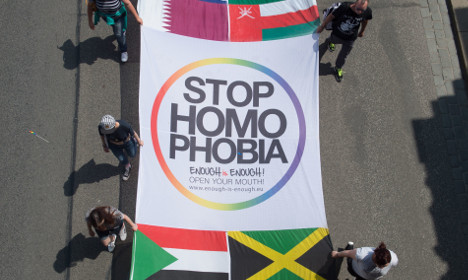 Left Party representative Henriette Quade was arguing that certain countries considered by asylum laws to be safe were in fact not, giving the example of places where homosexuality is still punishable with prison time.

“In particular for homosexuals, safety is more than precarious. Homosexuality is forbidden and is a taboo to the highest degree,” Quade said, according to the session’s minutes, which she posted on Twitter.

“Whoever lives openly as gay is threatened with a prison sentence.”

“We should also do that in Germany,” interjected Gehlmann.

Quade’s tweet of the exchange last Friday set off a firestorm online, with her post being retweeted some 800 times.

Now the regional Saxony-Anhalt branch of AfD says their party colleague had not actually called for gay people to be thrown in jail, and are demanding a revision to the session minutes, according to the Mitteldeutsche Zeitung (MZ) on Thursday.

In a Facebook post, the party branch said that Gehlmann had in fact meant that “it should be a taboo for homosexuals to openly live as gay”.

“In terms of this statement, Gehlmann remains without reservation, because he rejects the moral decline of living as openly gay,” the party wrote, explaining that he was responding to Quade’s statements about taboos rather than about prison sentences.

The party has already filed to change the minutes, according to MZ.

While the AfD began as a Eurosceptic party in 2013, it has more recently taken on increasingly far-right views which have stirred up outrage among its more moderate countrymen.

The national party adopted anti-Islam platforms in May, which included calls to ban minarets on mosques, the call to prayer, full-face veils for women and female headscarves in schools

Earlier this year, party leader Frauke Petry suggested that police should threaten to shoot immigrants at the border.

And a branch of the AfD in North-Rhine Westphalia in March drew the ire of the Internet when they compared themselves to Jewish Holocaust victims when a welfare organization said it would not hire AfD members.

The remark met widespread disapproval and has been used to explain a recent drop in the AfD's popularity in polling.