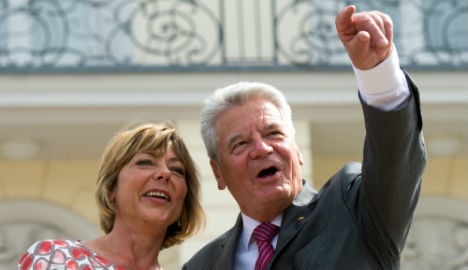 Journalist Daniela Schadt (left) fears that Joachim Gauck's health is too weak to stand a second term. Photo: Maurizio Gambarini/dpa
The Berlin-based daily did not cite any sources but said the popular former priest — whom most Germans would want to stand for a second term, a recent poll found — will inform Chancellor Angela Merkel of his decision on Monday.
“It's his partner Daniela Schadt who has advised him not to stand for a second term, particularly due to his age and his state of health,” Bild said.
Contacted by AFP, a spokesman for the presidency refused comment, describing the report as “speculation.”
Gauck was named president in 2012 when his conservative predecessor Christian Wulff was forced to quit over corruption allegations.
His recognition of the 1915 mass killings of Armenians during the Ottoman Empire as genocide in a speech last year, sparked outrage in Turkey.
This week, the German parliament adopted a resolution to the same effect.
Last year, Gauck also lashed out at xenophobic attacks in Germany on migrants and refugees, describing them as the country's “dark” side.