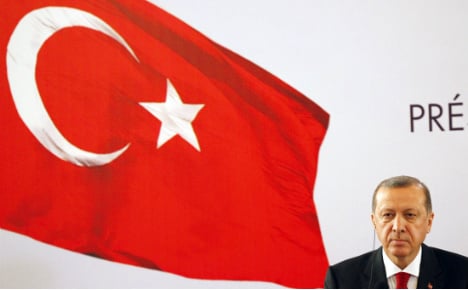 The resolution “will amount to a real test of the friendship” between the two nations, Turkish Prime Minister Binali Yildirim said.

“Some nations that we consider friends, when they are experiencing trouble in domestic policy attempt to divert attention from it,” he said at a meeting of his Justice and Development Party (AKP). “This resolution is an example of that.”

He stopped short of threatening Germany with political and economic retaliation, but added “3.5 million Turks live in Germany and actively contribute to the economy.”

German lawmakers are preparing to pass a resolution Thursday that recognises the massacre of Armenians by Ottoman forces as genocide, despite stark warnings from Turkey that the vote could hurt ties.

Put forward by the ruling left-right coalition and the opposition Greens, the resolution entitled “Remembrance and commemoration of the genocide of Armenians and other Christian minorities in 1915 and 1916” also carries the contentious word throughout the text.

The vote comes at a particularly awkward time as Germany and the European Union need Turkey to help stem a record influx of migrants even as tensions are rising between both sides over human rights and other issues.

Yerevan has long sought international recognition of the “genocide”, but Ankara rejects the use of the term to describe the World War I-era killings and argues that it was a collective tragedy in which equal numbers of Turks and Armenians died.

Heaping on pressure ahead of the vote, Turkish President Recep Tayyip Erdogan warned: “If (Germany) falls into such a game, that would harm our future ties – the diplomatic, economic, political, commercial and military ties between the two countries.”

“I believe all of these would be reconsidered,” he said, adding that he had also telephoned Chancellor Angela Merkel over the text.

Nevertheless, Merkel backs the resolution, her spokeswoman said, even though the German leader would not attend the Bundestag vote Thursday due to other official engagements.

Armenia and Turkey have been at loggerheads over the massacre.

Armenians say up to 1.5 million of their kin were killed between 1915 and 1917 as the Ottoman Empire was falling apart.

But modern Turkey, the successor state to the Ottomans, says that 300,000 to 500,000 Armenians and as many Turks died in civil strife when Armenians rose up against their Ottoman rulers and sided with invading Russian troops.

More than 20 nations, including France and Russia, have recognised the Armenian genocide, but Germany has not.