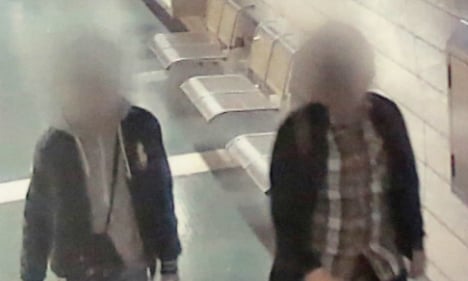 Two of the suspects in the bombing of a Sikh temple in Essen. Photo: DPA

“The crime could not have been prevented by the authorities,” a report submitted to the state parliament by state interior minister Ralf Jäger stated.

Authorities knew that the teenagers were “radicalized Salafists who might have wanted to commit property crimes like theft and burglary,” Jäger told broadcaster Westdeutsche Rundfunk (WDR).

“But there were no indications that in fact attacks were planned. Of course we know better today, but at the time we couldn't be 100 percent certain.”

Three people were hurt in the attack on April 17th, when a bomb exploded at the Gurdwara Nanaksar temple shortly after a wedding party when dozens of guests had left the building. Windowpanes shattered with the force of the blast and the door was ripped from its hinges, while parts of the slate facade were also torn away.

Witnesses said that they had seen a masked man throw a round object into the entrance before fleeing, and police found a discarded mask close to the scene shortly afterwards.

Police quickly identified three suspects in the bombing as two 16-year-olds and one 17-year-old. All three are now in custody.

Security authorities had had a tip-off from the mother of one of the teens, Tolga I., that he planned to travel to a “Salafist country” and join jihadist fighting, the report states.

Police in Duisburg revoked the suspect's travel papers and interviewed him twice before ordering him to report to an de-radicalization program.

While he claimed to be ready to co-operate, he never appeared at the appointment.

The mother contacted officers with a second warning in March after finding an electric stun gun and suspicious drawings among her son's possessions.

Police asked prosecutors for a warrant to search the teen's home but they rejected the request, saying more evidence was needed – which police were then unable to provide.

A second suspect, Yusuf T., had been reported to authorities by his school after making Islamist statements and behaving aggressively.

While police searched his house in December 2015, they didn't find any evidence that he planned to commit violence.

The school reported a second incident when Yusuf showed a video of an explosion on his phone. Police in Gelsenkirchen acknowledged that they had not done enough to follow up the lead.

But state interior minister Jäger said that in his view the report showed the police had done all they could in relation to the three teenagers and that the attack was not caused by police negligence.

A spokesman for the Gurdwara Nanaksar temple declined to comment on the police report when contacted by The Local.