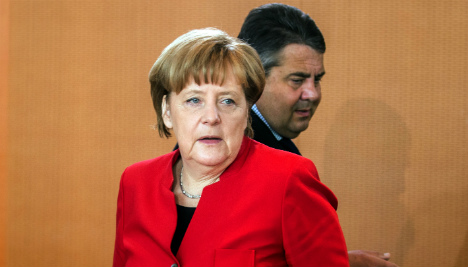 The survey by pollsters Insa for tabloid Bild showed that Merkel's Christian Democratic Union (CDU) and their Bavarian allies the Christian Social Union (CSU) would receive a combined 30 percent of the vote if elections were held immediately.

Added to their coalition partners the Social Democratic Party (SPD), who achieved just 19 percent, that puts the 'Grand Coalition' of the centre-right and centre-left below 50 percent support for the first time.

The latest figures, which see both the so-called “national parties” SPD and CDU lose half a percentage point, are yet another spur to the coalition partners as thoughts turn to upcoming elections in late 2017.

With most of the objectives laid out in their 2013 coalition agreement either in progress or checked off, Merkel and her Vice-Chancellor, SPD leader Sigmar Gabriel, have been doing their best to present a unified front in recent days.

Merkel's critics in her own party have said that the Chancellor needs to tack right, away from the centrist policies she has pursued in the wake of the refugee crisis, to win back voters lost to the anti-immigrant, anti-Islam AfD (Alternative for Germany party).

But the SPD in particular is keen to avoid the classic fate of coalition junior partners and find itself critically weakened in the next parliament.

Political observers expect Gabriel to do more to differentiate himself from Merkel and the CDU in the coming months in a bid to revive his party's fortunes.

Gabriel is also fighting for his own survival, as there have been questions in the SPD ranks recently over whether he is the right man to lead the centre-left into battle next year.

But with many high-ranking colleagues in the party reluctant to take on what is seen as an unwinnable fight against Merkel, Gabriel's position as the Chancellor candidate looks secure for the moment.

Meanwhile among the opposition parties, the Left Party suffered its own loss of half a percentage point in the latest poll to 9.5 percent.

The Greens and far-right AfD both held firm at 13 and 15 percent respectively, while the Free Democratic Party gained a point to land on eight percent – comfortably above the five-percent threshold to enter the federal parliament which it failed to attain in 2013.