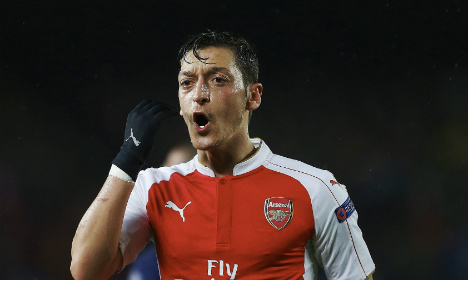 Andrea Kersten, head of the Alternative for Germany (AfD) in Saxony, told Die Welt that Özil’s pilgrimage was a “publicity stunt” which sent “an anti-patriotic signal.”

“When Özil regularly doesn’t sing along to the national anthem, we are supposed to treat it as his own private matter. But when he goes on pilgrimage to Mecca Tagesspiegel [a left-leaning daily newspaper] tells people it is ‘a sign for more understanding and integration.”

Özil, who plays in the English Premier League for Arsenal FC, uploaded the picture on May 22nd and the response of fans was overwhelmingly positive.

One called it “a sign for inter-religious peace, a sign for Germany, a sign for Europe and the rest of this agitated world going to pieces! True Islam is – as any other one – a religion of peace and understanding, not of terrorism and disuniting mankind! Well done, Mesut!”

Many others described how their respect for the player had increased since seeing the picture.

But Kersten saw things differently, telling Die Welt it was a sign of “a world gone wrong” when someone is praised by thousands of people and the media for making a pilgrimage to Mecca.

Praising Özil for this is “currying favour with a an ideology in which there is no equality between men and women, in which homosexuals are threatened with death and in which honour killings are seen as justified,” said the AfD politician.

In Islam patriotism is seen as superfluous “while ostentatious avowal to Islam is seen as exemplary,” she said.

With the European Championships around the corner, Germany’s national football players have once again come into the public spotlight, and this is just one in a series of controversies involving far right comments on national team figures.

The deputy leader of the AfD recently told a national newspaper that Germans “don't want to have a Boateng as a neighbour,” referring to Jerome Boateng, one of the most senior figures in the national team who’s father in from Ghana.

Last week, members of the anti-Islam Pegida movement sparked controversy when they took to Facebook to attack members of the national football team with migrant backgrounds.

Pegida supporters complained when childhood photos of players including Boateng, as well as midfielders Mesut Ozil and Ilkay Gundogan, were used in a marketing campaign for Ferrero's Kinder chocolate in the run-up to the UEFA Euro football championships, due to be held in France in June.