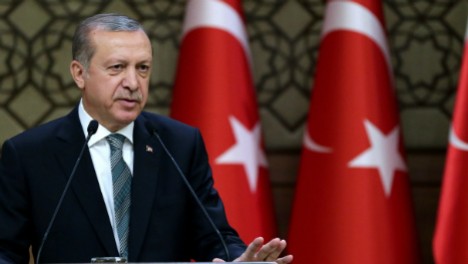 Speaking to German Chancellor Angela Merkel by phone ahead of the vote in German parliament, Erdogan said: “We expect common sense from Germany with regard to the resolution,” the private NTV television reported.

Germany's parliament votes Thursday on a resolution that qualifies the massacre of Armenians by Ottoman forces as “genocide”, despite strong warnings from Turkey.

Drawn up by the ruling left-right coalition and the opposition Greens, the resolution entitled “Remembrance and commemoration of the genocide of Armenians and other Christian minorities in 1915 and 1916” also carries the contested word throughout the text.

The vote comes just over a year after President Joachim Gauck became Germany's highest ranking official to describe the massacre as a “genocide”, drawing a fierce response from Turkey.

Its timing is also awkward, as Germany and the European Union need Ankara to help stem a migrant influx even as tensions are rising between both sides over a string of issues, including human rights.

Cautioning against the vote, Turkey's deputy prime minister and government spokesman Numan Kurtulmus said: “Germany must be careful concerning its relations with Turkey.”

I do not think that the German parliament will destroy this relationship for the sake of two or three politicians” who had put the resolution before the Bundestag, he added.

Armenians say up to 1.5 million of their kin were killed between 1915 and 1917 as the Ottoman Empire was falling apart and have sought to win international recognition of the massacres as genocide.

“It's about rendering historical justice, it's an obligation of the entire international community towards the memory of the victims of the genocide,” Armenian foreign ministry spokesman, Tigran Balayan, told AFP.

He added that recognition is “important for the prevention of genocides in future”.

Modern Turkey, the successor state to the Ottomans, rejects the claim, arguing that 300,000 to 500,000 Armenians and as many Turks died in civil strife when Armenians rose up against their Ottoman rulers and sided with invading Russian troops.

More than 20 nations, including France and Russia, have recognised the Armenian genocide, but Germany has not.