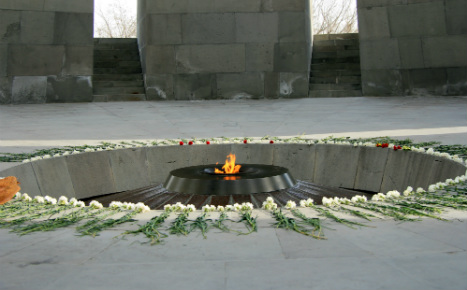 A memorial to the Armenian genocide in Yerevan, Armenia. Photo: DPA

The German lower house of parliament is set to vote on Thursday on the resolution over the two years of slaughter from 1915, which carries the contested word “genocide” throughout the text.

“Germany is our friend and our ally where many citizens of Turkish origin live,” said deputy prime minister and government spokesman Numan Kurtulmus.

“Germany must be careful concerning its relations with Turkey.”

“I do not think that the German parliament will destroy this relationship for the sake of two or three politicians” who put the resolution before the Bundestag, he added.

The debate over the resolution also comes at a hugely sensitive time in Berlin-Ankara relations.

Turkish authorities are angry over the failure to grant citizens visa-free travel to the EU and Germany is worried by the worsening rights situation in Turkey.

Turkish authorities have long lobbied Western allies not to recognise the killings as genocide and stepped up efforts last year on the 100th anniversary of the tragedy.

Armenians say up to 1.5 million were killed between 1915 and 1917 in a targeted campaign of genocide by top Ottoman officials to wipe out their people from Anatolia.

Modern Turkey insists comparable numbers of Armenians and Turks died in a collective tragedy when Armenians sided with invading Russian troops in World War I.