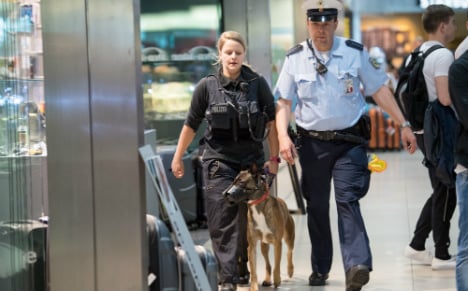 Police search Terminal 1 at Cologne airport with the help of a dog on Monday. Photo: DPA

“Security controls have been re-opened in Terminal One,” a federal police spokeswoman confirmed to The Local.

Police had raised the alarm at around 12.15pm after a person managed to get into the secure area without passing through security checks.

The spokeswoman explained that a 62-year-old Spanish man had managed to get in through an exit door “while trying to get to his aircraft as quickly as possible.”

“He just picked the wrong route,” she said.

Around 2,500 passengers were affected by the chaos at the terminal after the alarm was raised, airport spokespeople said in a press statement.

Things are getting back to normal at Terminal One although some flights are still delayed, the statement continued.

While five aircraft were prevented from taking off while police searched for the man, they all suffered only delays rather than cancellations.

Before the arrest bomb dogs were sent through the terminal to hunt for explosives and all passengers' identities were checked again.

Air traffic at Terminal Two went on as normal during the alert.

Stuck on the tarmac for hours

Deutsche Telekom head of communications Philipp Schindera tweeted that his flight was stuck on the runway because of the alarm.

Schindera told The Local by email that he had been scheduled to take off on a Germanwings flight to Zurich at 10.55 but had been sitting in the plane since boarding.

Aircrew had offered passengers no further information than was available in the media, he added.

“I'm the second-last to  be evacuated,” tweeted actor Daniele Rizzo. “Apparently we're all going to have to check in again.”

“Weird procedure. In this chaos it's really impossible to spot anyone. How and when will they take the airport out of lockdown?” Rizzo asked earlier as the evacuation was underway.

Security at Cologne-Bonn airport has regularly appeared in the headlines in recent months.

In March an undercover cop pushed her way through security to the air side without submitting herself to checks, setting off alarms.

And in April security inspectors reported that they had been able to smuggle weapons and bomb parts through the X-ray scanners at the airport undetected.