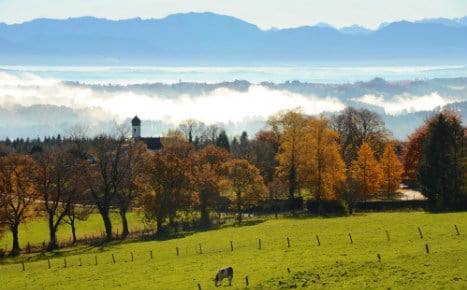 The view near Tutzing on Lake Starnberg. Photo: DPA

Peshtiwan Nasser Abdal has been holed up in a church for the past four months, in a desperate bid to avoid deportation from Germany.

The 21-year-old Yazidi Iraqi, like 400 other people, is being offered sanctuary by a German church under a tradition that dates back to the Middle Ages.

The practice of religious asylum had been largely forgotten until last year when a massive influx of migrants led some churches to offer safe haven to vulnerable asylum seekers.

Although the church is not above the law in Germany, few expect police officers to storm in to drag away asylum seekers, particularly in the conservative and largely religious southern state of Bavaria where Abdal has found sanctuary.

Abdal – who was persecuted in his home country by Isis jihadists who view his Yazidi faith as heresy – has been granted safe haven by the Catholic parish of Tutzing.

To kill the daily monotony of being confined to an area that spans the church building itself, a few administrative blocks, a large garden, and an apartment where he is staying, the young man sorts through donated clothes and toys in a former swimming pool turned storage place that is linked to the parish grounds.

“I am doing this every day to keep my spirits up,” he said.

Over the past four months, he has not dared to step out of the church's perimeter in the well-to-do town located on the shores of Starnberg lake, close to Munich.

He shares a small apartment with another Yazidi, Suud Yazdin Arab.

“It's all about routine here,” said Arab, 24, who arrived a month ago in Tutzing. “We try to stay busy by sorting clothes, through German classes, for example. But I hardly meet anyone from outside. It's difficult.”

Religious asylum falls in a grey area legally as it is not spelt out anywhere in German law. Whether a church should offer sanctuary is also at the discretion of a priest or pastor.

Those who apply it sometimes do so to the annoyance of the state authorities.

In practice, the tradition is tolerated in Germany, where about two in three of the 80 million citizens are Christians.

“Every institution must respect German law. But we also respect the special place of the church in the case of religious asylum,” said Stephan Frey, spokesman for the Bavarian interior ministry.

Clergymen who take the risk of offering sanctuary also know what they might be getting themselves into.

“We are not in a non-legal zone, we do not hide what we are doing, and the authorities are free to come to our premises,” said Peter Brummer, 58, the priest in Tutzing who has championed religious asylum over the past two decades.

At the same time, he does not rule out the possibility that he would physically oppose any attempt to expel the people he has offered protection to.

Brummer sees it as a responsibility to protect people who have, in his view, a good chance of obtaining refugee status in Germany due to persecution in their country of origin.

“We accept refugees who have a good chance of succeeding in their asylum applications, and for whom we are the last resort,” he said, adding that a person's religious affiliation plays no role in his decision of whom to offer safe haven to.

“Christians should not differentiate in the face of need,” he said.

Brummer said most of the people sheltered by churches are seeking help because of a rule which requires asylum seekers to apply for protection in the first EU country they are registered in.

Germany had initially waived this procedure for Syrians fleeing war, but has since re-applied the rule as 1.1 million people arrived last year alone.

“In most of the cases, it is to prevent them from being sent back to Hungary or Bulgaria, where the living conditions for refugees do not meet human rights standards,” said Brummer.

Hungary has been heavily criticized for its hardline stance against asylum seekers.

Brummer also noted that by offering sanctuary, the church is “providing a service to authorities” as it bears the cost of food, lodgings and medical fees for those it shelters.

Meanwhile, the two Yazidis are careful to avoid stepping out into the public.

But for Abdal, the long wait should soon be over, because European rules also state that after six months on German soil, he will be able file his application for asylum here.