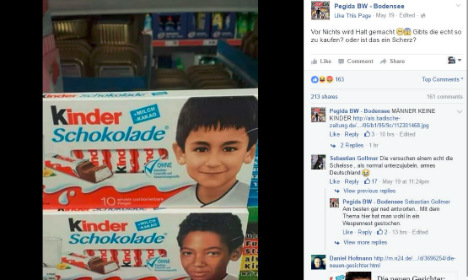 “They'll stop at nothing,” Pegida's branch at the Bodensee lake in Baden-Württemberg wrote on Facebook. “Can you really buy them like this?”

The comment appeared next to a photo of two packages of Kinder chocolate bars featuring a black child and a child of Middle Eastern appearance.

“They're trying to pass this shit off as normal, poor Germany,” one commenter responded with a crying-face emoji.

But what the commenters didn't realize was that the world-famous chocolate company had chosen to put childhood photos of the national football team on their packages to celebrate the upcoming Euro 2016 tournament in France.

The two they objected to were photos of Ilkay Gündogan and Jerome Boateng – both German nationals who play for Borussia Dortmund and Bayern Munich respectively, as well as Die Mannschaft.

Gündogan and Boateng are also two of the star talents of German football. The former is rumoured to be on the brink of a big money move to English side Manchester City, while Boateng just won the German league and cup double at the heart of Bayern's defence.

Other internet users were quick to spot the anti-immigrant crowd's mess-up and launch into mockery.

“Poor Germany… if you think diversity and migration are part of it. Close the borders and no exports, no migration! Then you'll get unemployment and local league [football],” one person wrote.

“It's best just not to answer,” the person behind the Pegida page told their followers. “We've really dived into a wasps' nest here.”

Publicity around Pegida's misdirected outrage got so bad that Kinder manufacturers Ferrero were forced to issue their own statement on Facebook.

“We at Ferrero would like to distance ourselves from any form of xenophobia or discrimination,” the company wrote on Tuesday in comments under a video announcing the football-themed product.

“We don't accept or tolerate this in our Facebook communities either.”