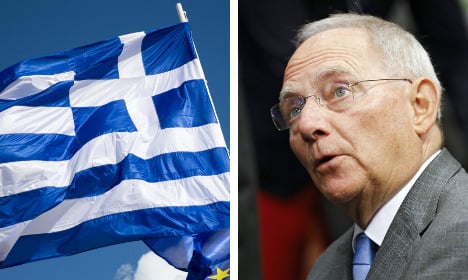 Finance Minister Wolfgang Schäuble appears to have got his way at a Brussels showdown. Photos: DPA

The cash is the latest tranche of the €86 billion promised to Athens last year in exchange for cuts to public spending and structural reforms to its economy in the third bailout programme for the Hellenic Republic.

Now that the decision has been made, the risk of Greece going bankrupt this summer has been avoided.

“This is an important moment for Greece after such a long time,” Greece's finance minister Euclid Tsakalotos said in Brussels after the meeting.

But there are still several hoops for the Greeks to jump through – and votes to be held in several Eurozone parliaments, including the Bundestag (German parliament) – before the money will be paid out.

Importantly for Finance Minister Wolfgang Schäuble, who represents Germany at the Eurogroup, there will be no talk of debt relief (reducing the total amount to be paid) until 2018, well after German elections late next year.

The International Monetary Fund (IMF) had threatened not to join in the latest phase of the bailout unless debt relief was included.

Hardline countries led by Germany resisted any talk of a 'haircut' for holders of Greek debt.

With the IMF remaining on board with the bailout plans, the Eurogroup statement released at 2am after long hours of talks looks like a victory for Schäuble and his allies from countries like Finland and the Netherlands.

But the IMF's European director, Poul Thomsen, insisted after the talks that there is now widespread agreement that Greece's debt is unsustainable – something the Washington-based institution warned of in a paper released on Monday.