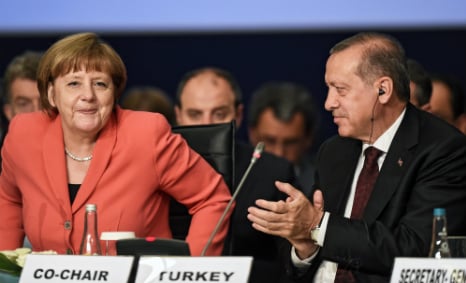 Merkel's talks with Erdogan came as tensions surge between Ankara and the EU over a hugely controversial deal for Turkey to limit the flow of migrants to Europe in exchange for incentives including visa-free travel for its citizens.

EU leaders are insisting that Turkey abides by 72 conditions before this takes place, with a demand to change counter-terror laws proving particularly contentious.

The EU is pressuring Ankara to narrow its definition of terror to stop prosecuting academics and journalists for publishing “terror propaganda.”

The EU had said that if the conditions were fulfilled Turks would enjoy visa-free travel to the passport-free Schengen area by the end of June at the latest.

But Merkel said that this target was now receding out of sight and was unlikely to be met.

“We must do everything that we can to continue to discuss as it is likely that by July 1st certain things won't be put in place, in other words the visa exemption [will not be granted] as some conditions will not have been fulfilled.”

“I said clearly that the path towards the removal of the visa demand is based on 72 points which are not new and were presented in December 2013 by the European Union.”

“We need all these points to be put in place to allow the visa exemption”.

Merkel also said she had told Turkey's President Recep Tayyip Erdogan of her “deep concern” over a law lifting immunity for Turkish lawmakers that critics believe is aimed at evicting pro-Kurdish lawmakers from parliament.

“Of course, the lifting of the immunity of one quarter of the deputies is a source of deep concern. I expressed this to the Turkish president and we discussed these questions very openly,” she said.

“Not all my questions have been answered, we will have to watch developments closely,” she told reporters at the German consulate after the talks.

Turkey's parliament on Friday adopted a highly controversial bill that would lift immunity for dozens of MPs, which the opposition pro-Kurdish Peoples' Democratic Party (HDP) fears is aimed directly against its lawmakers.

The move could see dozens of HDP deputies facing criminal prosecution and losing parliamentary seats on accusations of supporting the outlawed Kurdistan Workers' Party (PKK), which has waged a three-decade insurgency in the southeast.