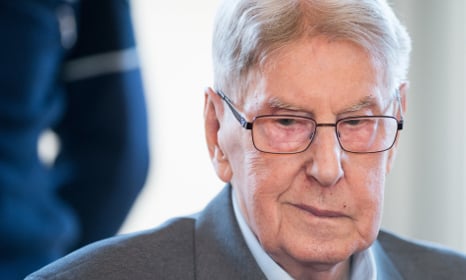 “The defendant contributed to the extermination aim of the camp,” chief prosecutor Andreas Brendel told the court in the western German town of Detmold, according to national news agency DPA.

“We owe it to the victims to pursue the crimes even today,” he said.

Hanning in April broke his silence on his time at Auschwitz 70 years after the war, telling victims “I am sorry”.

He admitted to the court that he knew prisoners were being shot, gassed and their bodies burned at the death camp in occupied Poland, but that he had been “silent all my life” about the atrocities because he was ashamed.

More than one million European Jews were killed at the camp in occupied Poland, and among the 6,500 former SS personnel at Auschwitz who survived the war, fewer than 50 have been convicted.

Hanning's trial came on the heels of a high-profile case last year against Oskar Groening, dubbed the “Bookkeeper of Auschwitz”.

Groening was sentenced in July to four years in prison, even though he had previously been cleared by German authorities after lengthy criminal probes dating back to the 1970s.

But the legal foundation for prosecuting ex-Nazis changed in 2011 with the German conviction of former death camp guard John Demjanjuk, solely on the basis of his having worked at the Sobibor camp in occupied Poland.

Another case is currently being heard by a German court, against former SS medic Hubert Zafke, 95, who is charged with at least 3,681 counts of complicity in killings.

Hearings have however been postponed on several occasions owing to the poor health of the defendant, raising questions on whether it can go ahead.