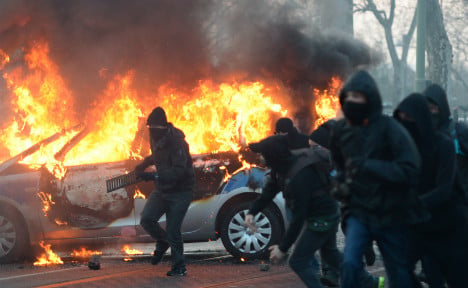 The raids relate to violent protests in Frankfurt in March 2015. Photo: DPA

According to photographer Po-Ming Cheung, officers turned up at his apartment at six in the morning on Wednesday with an order to seize his hard drive and PC tower.

Unusually for a journalist, he had been given no prior warning of the raid.

On the same day, cops tried to raid the apartment of another photographer, Willi Effenberger, but found that he had already moved out of the premises.

Later attempts to seize evidence from him at his parents’ house and a property he had moved out of 15 years previously also failed, as according to his own account, the photographer is now in the Middle East.

The raids relate to violent protests organized by anti-capitalist group Blockupy against the inauguration of the new European Central Bank (ECB) headquarters in Frankfurt in March 2015.

The ferocity of the violence took Germany by surprise, with the finance capital shrouded in smoke for hours as protesters set vehicles, including a police cars, and rubbish bins alight.

Clashes between demonstrators and police also led to dozens of arrests.

Prosecutors in Frankfurt gave the green light to the raids on the two photographers in an investigation into attempted manslaughter, after several protesters attacked two police cars with fireworks and stones as officers sat in the vehicles., the Frankfurter Allgemeine Zeitung (FAZ) reports.

The raids on the journalists were justified by the severity of the crime being investigated and by the fact that both photographers have known links to the radical left-wing scene in Germany, prosecutors argued.

Effenberger, meanwhile, compared the police action to treatment of journalists in Turkey.

“Left-wing journalists are clearly not journalists at all in their [Frankfurt prosecutors’] eyes, but outlaws. A way of thinking I last personally dealt with during a trip through Turkey,” he wrote on Facebook.

In its annual report on global press conditions published in April, Reporters Without Borders criticized Germany for clamping down on press freedom.

While the Federal Republic still ranked 16th overall, it slipped four places after the journalists' association argued new laws made it easier for the state to prosecute whistleblowers and seize data from journalists.