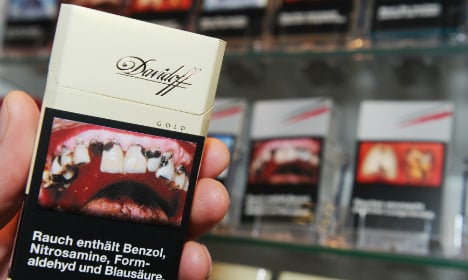 Buying cigarettes is about to get a lot grimmer in Germany. Photo: DPA

Smokers in neighbouring countries like the UK and France have long had disgusting or scary images of the consequences of smoking glaring out at them from their boxes of gaspers.

And Friday is the day that Germany joins the grim club. Along with the familiar “smoking is deadly” messages, images of sickness and death will be compulsory from Friday.

It's taken two years for Germany to implement EU rules on tobacco products, which were originally decided in May 2014.

Many would argue that it's long past time, as a high proportion of Germans smoke.

A survey by the Federal Statistics Office in 2013 found that 24.5 percent of people aged 15 and over smoke – or around 17 million people.

And the government's drugs commissioner estimates that around 110,000 people die each year of smoking-related illnesses.

Despite graphic warnings, around a quarter of French people still puff on their clopes according to the World Health Organization (WHO).

The UK  has made more of a dent on its populations love of the weed. Only 19 percent of Brits now confess to smoking, researchers found in 2013.

Rules on smoking in public remain an important difference when the UK and France are compared with Germany.

Britain and France have both banned indoor smoking in bars and restaurants, while in some German states bars are allowed to continue the practice under certain circumstances.

Studies have frequently shown that images are more effective than text alone at increasing smokers' interest in quitting and educating them about risks.

A WHO survey of available research in 2009 found that “graphic pictures can significantly enhance the impact of warning labels”.

But more than three quarters of Germans – 76 percent – said that they don't believe the shock images will work to reduce smoking, a monthly Deutschlandtrend survey by broadcaster ARD published on Friday found.

And the German public don't seem to be alone in doubting the new move.

Some other countries have moved on from using shock images to banning all branding and logos from cigarette packages, as France decided just this week.

Germany is a long way away from that point, with tobacco manufacturers allowed to sell packages produced before Friday for up to a year after the regulation comes into force.

In fact, tobacco producers have printed up as many packages as possible before the deadline to delay having to comply for as long as possible.