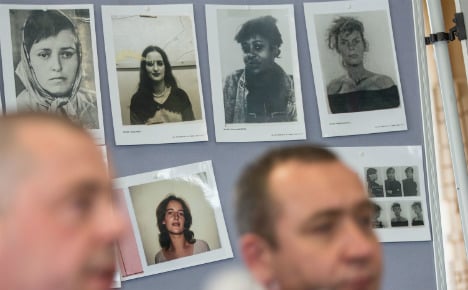 Photos of alleged victims at a press conference in Wiesbaden on Thursday. Photo: DPA

At the beginning of the 1970s the murder series in and around Frankfurt began. Every few months a prostitute disappeared.

According to the Frankfurter Allgemeine Zeitung (FAZ) acquaintances assumed the women had swapped city or that they had died of an overdose.

But in 1971 Gudrun Ebel, a 19 year old, was found dead in a sparsely furnished garden shed. Her body had been carved open.

Although they recognized at the time that they were dealing with an extremely unusual case, police didn’t get far with the investigation and the case went cold.

On Thursday, 45 years later, at a press conference in Wiesbaden, state police announced that they believed they knew who was responsible for Ebel’s death, and those of up to ten other people.

The suspect at the centre of the investigations in Manfred S., described by police as “a completely normal family man” who had never come across their radar.

If he is found guilty of the crimes, though, he will never see a day in jail.

S, died of cancer in 2014 and it was only later that police found body parts in stored in barrels in a garage that S, had rented.

The body parts were those of Britta D., another prostitute from Frankfurt, who had already been dead for ten years when police found her remains.

“Because of the type of injuries that the body displays, it appears likely that this is not the first time that the man murdered,” said Urban Egert, who is heading the investigation.

For a year officers sorted through unsolved cases that bore similarities to the evidence from S.’s garage.

They came across a huge number of cases, mainly involving Frankfurt prostitutes. Eventually they sorted it down to the ten which investigators now believe S. was responsible for.

All were tied together by a gruesome commonality. The murderer had taken an internal organ or body part from each one.

During investigations police found violent pornography on S.’s home computer, images which bore horrifying similarities to the injuries of his suspected victims.

At times the images were “almost identical” to how the murder victims were found, say police.