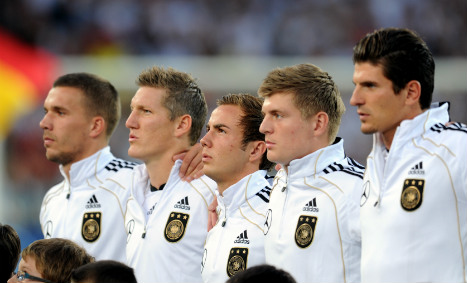 According to a report by the Federal Criminal Police Office (BKA), seen by tabloid Bild, specific teams at the tournament are in danger, including the German team.

“A successful attack on a team from one of the ‘crusader nations’ – to which Germany also belongs – would have a powerful symbolic effect,” the report states.

The European Championships are being held in France this year and kick off on June 10th, with the final to be held a month later, on July 10th.

Fears that the championship  – expected to draw 1 million fans from across the continent – could be a target were set off by terror attacks in Paris in November which killed 130 people.

On the night of November 13th, suicide bombers tried and failed to penetrate the Stade de France, where a friendly match between France and Germany was going on.

Three suicide bombers blew themselves up outside the stadium, killing one person.

Days later Germany cancelled a friendly match in Hanover against the Netherlands after receiving tip-offs from foreign intelligence agencies that a terror attack was being planned there.

No arrests have ever been made in relation to the alleged plot.

But since then members of Die Mannschaft have always insisted they are unfazed by potential terrorist threats.

The BKA reports also states that France is a particular target of the Isis terrorist because of its military involvement in Mali and Syria, where it is currently involved in a bombing campaign on Isis targets, and its history of colonialism in North Africa.

Particular areas of risk are “symbolically important or soft targets which would grab the attention of the media and cause large numbers of casualties,” the report states.

France has assured restive European fans that maximum security provisions are being made for the tournament.

Speaking in March, French Interior Minister Bernard Cazeneuve said that “We cannot permanently raise what is already a very high level since January 2015,”

French MPs voted on Thursday to extend the country's state of emergency, introduced after November terror attacks, to cover the time of the tournament.