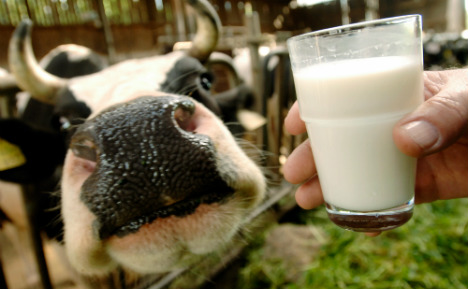 At the start of May, discount supermarket Aldi slashed the price of milk in its outlets from 59 cents for a litre all the way down to 46 cents, meaning milk is now cheaper than some brands of mineral water.

With the latest price cut, dairy farmers are now earning less than 30 cents per litre and in some cases as little as 18 cents a litre. That is a drastic loss in earning in comparison with 2013, when they earned as much as 42 cents on each litre.

Farmers say they need to earn at least 40 cents a litre to make ends meet.

The Association of Milk Farmers (BDM) says the situation is so bad that many of their members are threatened with bankruptcy.

There are 75,000 dairy farmers in Germany, according to Spiegel, and thousands of these have already gone out of business in the last few months, with many more fighting for their future.

While the EU pledged €500 million to support dairy farmers across Europe, €67 million of which was assigned to Germany, farmers say more needs to be done.

At a protest on Tuesday outside the constituency office of Federal Agriculture Minister Christian Schmidt, BDM head Romuald Schaber said in a statement “our nerves are at an end,”.

The farmers are calling for financial help and say that the government needs to reintroduce quotas on milk production.

The apparent cause of the current crisis is the fact that EU quotas on milk production were ended last year, leading to a surge in production across the continent.

But Agriculture Minister Schmidt is refusing to consider a new quota system.

“The milk crisis needs to be solved by the market,” the politician from Bavaria’s conservative Christian Social Union (CSU) said.

The protest outside his office has now turned into a sit-in with farmers promising to stay there until the end of the month.

“Schmidt is asking for calm, but how we stay calm when we are fighting for our existence and the government is doing far too little to help?” asked BDM head Romuald Schaber.