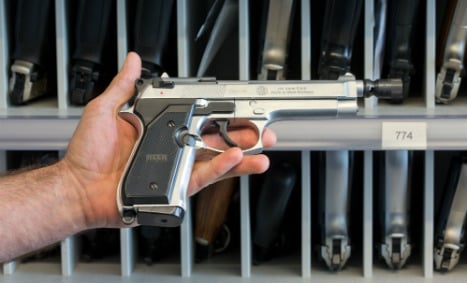 As the number of refugees arriving in Germany’s southernmost state rose sharply in 2015 and the first few months of 2016, so did that number of locals applying for small weapons licences – authorization to use blank-firing guns.

Although blank-firing guns are designed to dissuade attackers, they can also be deadly.

In December 2015, a man in Mecklenburg-Western Pomerania was shot dead with a blank-firing gun. A man later confessed to the crime in police custody.

Police had yet to confirm at the time whether he had modified the gun in any way.

But that number was easily outstripped again in just the first three months of 2016. In February 7,435 new licences were given out and in March 4,677.

The figures, reported by national broadsheet Die Welt, were revealed after a parliamentary question posed by the Green Party.

“The explosive rise in the number of small weapons licences being handed out is very worrying,” Katharina Schulze, interior affairs spokesperson for The Green Party in Bavaria told Die Welt.

“We don’t need the people of Bavaria to arm themselves. Possessing arms and practising vigilante justice are not an example we want to set.”

“The danger is that more and more conflicts will escalate if more people arm themselves. We need to act against this.”

In North Rhine-Westphalia the number of small weapons licences is also know to have risen dramatically.

In February the Rheinische Post reported that the number had risen by 14 percent in a year.

In January alone 3,089 more applications were made than in December.

January was the month in which hundreds of women made complaints of sexual assault after men, largely of north African appearance, attacked them at New Year’s celebrations in Cologne.

Police have, however, repeatedly said that refugees have not increased crime figures out of proportion with the increase in Germany's population since the 2015 influx.