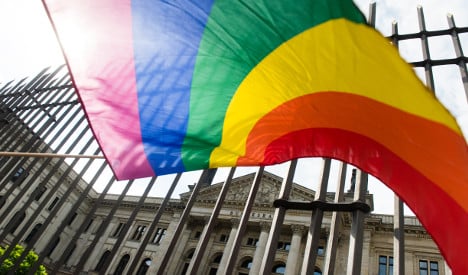 Germany was ranked below 15 other countries in Europe for LGBTI rights, placing it on par with countries like Greece and Hungary in a new Rainbow Europe report.

Advocacy group ILGA-Europe ranked 49 countries in the annual report, based on their laws pertaining to same-sex marriage, adoption, rights for transgender people, protections against discrimination and more.

Germany, for example, allows same-sex partnerships but does not recognize same-sex marriage and gay couples have limited rights when it comes to things like adoption or in vitro fertilization.

ILGA-Europe advocacy director, Katrin Hugendubel, explained to The Local that Germany has stagnated on progress in gay rights as others have continued to pass new legislation.

“Germany is moving down because standards are going up and there is also a big complacency problem in Germany,” Hugendubel said.

“The general feeling is that things are quite nice to live as an LGBTI person in Germany and there are no real problems – but we’re stuck,” explained Hugendubel, who is from Stuttgart.

She pointed out that in Germany, same-sex couples are not able to jointly adopt a child together, but are able to take in a foster child.

“Often the opposition argues that not having equal adoption rights is about the best interest of the child, and there are enough studies to counter that argument, but even if that is the reason, how can fostering a child be allowed but not adoption?” she said.

Hate crime and hate speech laws also do not include specific language on sexual orientation or gender identity.

The report highlighted Ireland as one of the countries to take big steps in LGBT rights after a voter referendum and then legislation legalizing same-sex marriage last year.

The fact that a very Catholic and traditional country like Ireland – which had previously been ranked far below Germany in the Rainbow Europe report – could make such a change put pressure on German politicians at the time.

But Chancellor Angela Merkel’s government still insisted that same-sex marriage was “not a goal of this government”.

“There are opposition forces in Germany who present themselves as concerned parents and they have been part of this marriage equality debate,” explained Hugendubel.

Increased support for right-leaning groups like the anti-Islam Pegida movement and party Alternative for Germany (AfD) have also made Germany more hesitant to deviate too much from what conservative voters might believe, she said.

“With Pegida and AfD, there is a fear within [Merkel’s] CDU party to move too far away from the people,” Hugendubel said.

“But actually this cannot to be substantiated. Even within the CDU there are people supporting marriage equality.

“I sometimes feel there is a fear of taking leadership.”

Public ahead of leaders

In contrast to the German government, however, the general public seems to be more accepting of the LGBT community.

A survey cited in the report showed that 65 percent of Germans were in favour of equal marriage rights, 57 percent believe same-sex couples should have equal adoption rights and even of German Catholics, 70 percent want the Church to recognize same-sex marriages.

State governments have also made bigger strides than the federal government, with nearly all 16 states adopting plans to combat homophobia and transphobia in areas like education, sports, and health care – except for Bavaria, Hamburg, Brandenburg and Saarland.

Overall in the Rainbow Europe report, Malta came out on top, mostly due to its groundbreaking laws over the past year to protect intersex people – those born with sex characteristics that do not fit into typical notions of female and male bodies.

Belgium took second place, followed by the United Kingdom, Denmark and a tie of Spain and Portugal for fifth place.

The countries that performed the worst in the report were Monaco, Turkey, Armenia, Russia and Azerbaijan at the very bottom.

But Hugendubel emphasized that though Eastern European countries and those outside the EU tend to be rated the worst for gay rights, Western countries still had much progress to make.

“You can’t move ahead on one thing and think the job is done,” said Hugendubel. “In the EU there’s a feeling that lack of equality is only happening outside of Europe, so this is a reminder that we’re not all on the right side of history quite yet.”