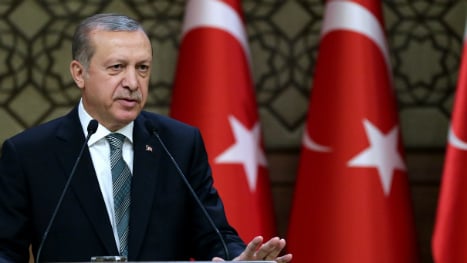 Erdogan had sought a court order to stop the media group's chief Mathias Döpfner from repeating support for a TV satirist who crudely insulted the Turkish leader.

The legal action came after Döpfner published an open letter in one of the group's newspapers, in which he backed Jan Boehmermann — the satirist who in a poem accused Erdogan of bestiality and watching child pornography.

But the court dismissed Erdogan's application on the basis of the “constitutionally guaranteed right of the defendant to the freedom of expression”.

“When a potential conflict arises between the fundamental right to the freedom of expression and the personal rights of the plaintiff, it is admissable for Doefpner to publicly express an opinion in this controversial

Boehmermann's recital of his so-called “Defamatory Poem” on national television in late March sparked a diplomatic firestorm and a row over free speech.

In a controversial move, Chancellor Angela Merkel authorised criminal proceedings against the comedian after Turkey requested he be prosecuted for his “smear poem”.

During the broadcast Boehmermann gleefully admitted his poem flouted Germany's legal limits to free speech and was intended as a provocation.

In his letter, Döpfner took the comedian's side, declaring: “For me your poem worked. I laughed out loud.”

Erdogan has come in for fierce Western criticism of late over his increasingly authoritarian rule.

US President Barack Obama has warned that Turkey's approach towards the media is taking it “down a path that would be very troubling” after two leading opposition journalists were put on trial.

In response Erdogan defiantly declared he would not take “lessons in democracy” from the West.