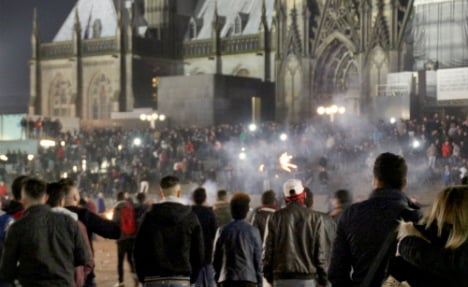 Police can be seen scuffling with members of the large crowds or helplessly watching men loosing rockets and detonating bangers around the square in front of the station and the cathedral steps.

“We can't hold this with two people,” one officer says to another during the extracts.

The video shows scenes outside the main train station around 11:30pm on New Year's Eve, when up to 1,000 people, many of them of Arab or north African appearance, were crammed into the space.

Police higher-ups finally decided to clear the square by force at 23:40 – but the full-length video clearly shows insufficient numbers of officers to effectively remove the crowd.

When the video was shown in the North Rhine-Westphalia (NRW) state parliament's inquiry committee, members immediately noticed that the police also failed to issue instructions over loudspeaker to the mass of people.

Later in the evening, the groups of men driven off the square are believed to have once again gathered around the station and harassed women passing through the area.

The video was released on the same day that NRW interior minister Ralf Jäger faced the inquiry committee in Düsseldorf.

There he denied accusations that the state government had put pressure on police to remove the word “rape” from the first reports about New Year's Eve.

“The accusation of a cover-up is made up out of thin air,” he said. “No-one had any idea of what happened there until January 3rd.”

Jäger claimed that even the Cologne police did not have a clear picture of the extent of the sexual violence before January 4th.

“This was a completely new phenomenon that has come to light for the first time ever in Germany,” he went on. “It wasn't predictable in advance.”

Jäger is the first politician to take the stand before the committee after long series of police officers and Cologne city officials.

And he didn't hesitate to lay the blame for the mistakes on New Year's Eve at the feet of police.

Commanders had underestimated the forces needed at the train station and later failed to provide reinforcements, he argued.

The attacks on New Year's Eve shocked Germany and reverberated around the world, as in the following days hundreds of reports of sexual assault and other crimes poured in to police stations.

So far 1,170 crime reports have reached prosecutors, including 492 dealing with sexual assault.

A number of prosecutions have already been launched, but while several people have been jailed, no-one has yet been convicted on sexual assault charges.