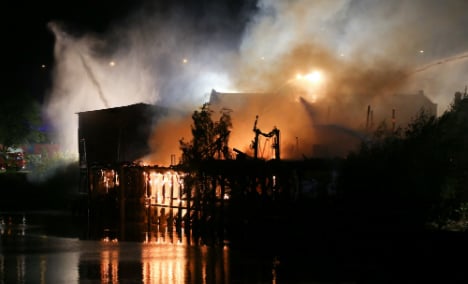 Hundreds of firefighters were able to bring the blaze under control by early on Monday morning after battling through the night.

No-one was hurt during the fire, which broke out near the site of celebrations for the 827th “harbour birthday” – an enormous city festival that attracted over 1.6 million visitors during its four-day run.

Emergency services are expected to remain at the scene until around midday to make sure the fire is completely extinguished, a spokesman told broadcaster NDR.

Police and firefighters told the broadcaster that, despite the large cloud of smoke visible from the festival area, there had been no need for extra safety measures – despite a tweet from the fire service that an evacuation would be necessary.

Onlookers were also left astonished at the size of the blaze.

One musical performance planned for the harbour could not go ahead, while a stretch of the nearby Autobahn 255 was closed for a short time because of the thick smoke.

But the fire didn't little to dampen turnout on the fourth and final day of the “harbour birthday”, which saw around 600,000 people partying around the harbour district.

It's been a landmark in the north German calendar since 1977, when Hamburg authorities decided to commemorate Emperor Friedrich Barbarossa's 1189 decree granting the port's ships customs-free access to the sea.

Since then the anniversary has grown into a massively popular festival with music, celebrity appearances from local heroes like actor Til Schweiger, and a fireworks spectacular after sundown.

This year's celebration saw around 300 ships sail past spectators towards the sea, including a number of traditional tall ships. “The fabulous sunshine made sure that there was an unusually high number of Hamburgers and visitors from elsewhere,” city finance chief Frank Horch told NDR on Sunday.