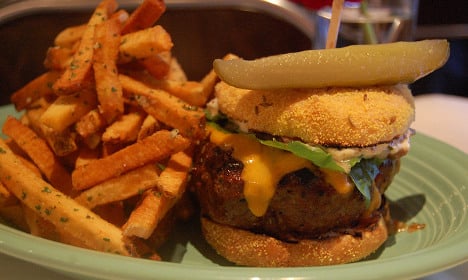 The owners said they had been forced to close the business “until further notice” in a statement on their Facebook page.

Due to “concrete threats”, they explained that they felt unable to guarantee the safety of the restaurant's employees – but vowed to continue to “denounce blatant injustices”.

The burger named after the Turkish leader first appeared on the menu of Urban Burgery at the end of April.

Erdogan burgers were advertised as “delicious and juicy”, and served “with goat's cheese – naturally” in reference to a poem by German satirist Jan Böhmermann's poem which referred to Erdogan as a “goat fucker“.

“Delicious juicy, and the next big thing, is Erdogan, the burger. Its weight is more than any doner – just its taste, which is even better.”

Böhmermann found himself at the centre of a media storm after reading out the poem on television, which turned out to violate a rarely used German law which forbids insulting foreign heads of state.

Chancellor Angela Merkel has allowed an investigation to go ahead, a move critics have said undermines Germany's principles of freedom of the press and of expression.

The Erdogan burger initially proved popular, picking up media coverage in local Cologne paper Express and national tabloid Bild, so that Urban Burgery was sold out on May 1st.

But the restaurant also received threats and criticism. The owners pointed to one threat in particular, in which a user named after US gun manufacturer Smith & Wesson called for others to join him in “visiting the business”, as the reason they no longer felt safe.

Despite closing its doors temporarily, the owners of Urban Burgery were defiant in their statement, saying: “We will not let ourselves be muzzled by enemies of democracy, rule of law and civil liberties….now more than ever!”